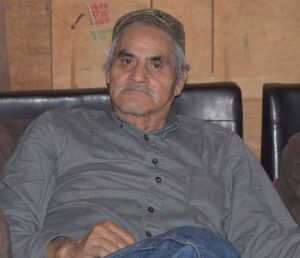 William Lossie, 84, went home to his Heavenly home on Saturday, March 20, 2021 at Tsali Care after an extended illness.

He worked at Oconaluftee Indian Village as an arrowhead demonstrator for many years. He was a member of the Qualla Arts and Craft Mutual. He was skilled at making different crafts from masks to stickball sticks and stickballs. He also made the torches the Tribe uses today. He was a mechanic and was a jack-of-all-trades. He had many talents.

He believed in God and was a healer. He helped a lot of people from around the world. He is preceded in death by his wife, Martha Cucumber Lossie; his parents, Betty Long Lossie and Hayes Lossie; sisters, Mary Jane Lossie, Annie Lossie Taylor, and Kathrine Lossie; and two brothers, Julius George and Thomas Lossie Jr.

He is survived by two daughters, Sarah Pascual and Rebecca Lossie of Cherokee; one son, Joseph Lossie (Sandy); seven grandchildren, Serita, Jose, Tim, Olivia, Lucero, Dayini, and Ayosta; seven great grandchildren, Gola, Logan, Tim Jr., Alex, Tristen, Daniel, and Olli; one great great grandchild, Florence, and one on the way; and several nieces and nephews. William will be missed by all who knew him.