Athletes are always chasing rings and one member of the Eastern Band of Cherokee Indians (EBCI) is chasing five in the form of the Olympic rings.  Kallup McCoy II, an EBCI tribal member from the Birdtown Community, is training to be on the line for the 2024 Olympic trials in the marathon event. 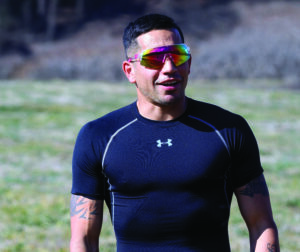 Kallup McCoy II, an EBCI tribal member from the Birdtown Community shown at Kituwah, is training to be on the line for the 2024 Olympic trials in the marathon event. (SCOTT MCKIE B.P./One Feather photos)

“This is a goal that is going to take some time,” he said.

The 2024 Summer Olympic Games are scheduled to be held in Paris, France from July 26 – Aug. 11, and McCoy II is aiming to be included in the U.S. Olympic trials prior to those games.  According to USA Track and Field (USATF), a runner can qualify for the trials by running a 2-hour 17 minute marathon or a 64 minute half-marathon in a USATF race.  At the 2020 U.S. Olympic trials, a total of 175 men finished the marathon event with Galen Rupp, running for NIKE, winning with a time of 2:09.20.  Simply running the qualifying time of 2:17 would have landed a runner at the event in 34th place.

So, McCoy II knows what he has to do to be competitive and he plans to hit the qualifying mark in the half-marathon distance, and right now he is around 17 minutes off of that pace.

“When I look at the gap that I have to make up, it’s a little overwhelming, and it almost seems impossible,” he noted.  “But I truly believe that impossible is not a fact.  That’s an opinion.”

He added, “I can’t look at the long game so much as much as I am taking small bites and increments out of my time.”

McCoy II has been engaging in ultra-running for the past several years and is now re-focusing into shorter distances.  “I’m having the mindset of an Olympian right now in how I sleep, how I eat, my training – that’s the trinity of a runner.  I’d had to re-focus off of ultra-running and doing these big events and just being really deliberate with my training and focusing on speed and intensity and the workouts surrounding that.”

He has some smaller races planned in 2021, and he is planning to enter a large race in Naples, Fla. in January 2022.  “That’s going to be a fast course – super flat, and I can really test myself.  By that time, I’m hoping to be around 70 minutes.”

Currently averaging around 50 to 60 miles running each week, he is going to increase that to 70 to 100 miles per week.  “The fact that I’m shooting for a 5-minute personal record is kind of lofty, but we’ll see how it goes.” 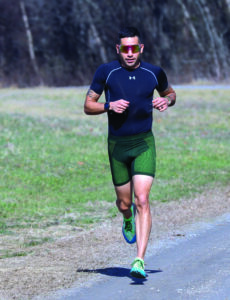 McCoy II trains and runs alone at the moment, but this goal is something he realizes will take a team effort.  He is planning to reach out to other runners including ones with the Asheville Distance Project.  “I don’t think that any type of goal as big as this – relying on yourself will only get you so far, and just having that competitive team or support of runners is going to be critical.”

His immediate goal is to be on the line for the Olympic trials, but he also has his sights set to make the U.S. team.  “That would be a huge accomplishment in itself just to toe the line with some of the greatest runners in our country.”

Support from his family, friends, and community members has been helpful.  “They all have been encouraging.  I have not had anybody say, ‘you can’t do that’.  But I don’t think they understand the level of runner that you have to be to qualify for the Olympic trials.  I don’t think they understand just how fast you are really moving and just how many people attempt to qualify and don’t make it.”

Training for the Olympics is a full-time job in and of itself and is something McCoy II never thought he’d be doing seeing as how just a few years ago he was in the grips of substance abuse.  “The fact of coming from my background and just the fact that I haven’t been running very long in comparison to the competition that I’ll be going up against – most of the guys that qualify are professional runners, guys that have come out of All-American in some type of distance event…I always think to myself, ‘I shouldn’t be here’.”

McCoy II, a co-founder of RezHope, an addiction recovery support group, added, “I’ve got all of these buckets in my life.  We’re still working on the Recovery House.  We’re going to have that done soon, and I’ll be the director of that; being a husband as well as trying to figure out how to be a father again; and train; and my recovery.  But, it’s fun.  I find fulfillment in that – in the adventure of it and trying to balance things.  That’s what life is – how you balance things.”

And he’s willing to put in the work.  “It’s going to be a lot of sacrifice.  But we all get the same 24 hours in a day.  With that being said, you make time for what’s important to you.  You sacrifice sleep.  You sacrifice going out, hanging out with friends – those small things.  I’m just trying to find that balance.”

While training is hard and takes sacrifice, McCoy II said he is enjoying the journey.  “Have fun, realize that the brevity of life and the fact that we won’t get this moment back.  I’m representing people in recovery.  I’m representing my community, my Tribe.  That’s where my mind goes.  I shouldn’t even be here.  So, I’m going to give everything I have.”

Being a positive role model and showing that recovery can and does occur keeps him going.  “I can’t believe I’m where I’m at and I get to continue to grow and inspire somebody.  That keeps me pushing.”