CULLOWHEE – Western Carolina University has obtained a rare photographic glimpse of Bryson City and Swain County in the early 1900s, thanks to a recent donation to Hunter Library’s renowned Special and Digital Collections.

The nearly 100 images from early 20th-century Swain County were taken by Frank Emmett Fry, a mining superintendent and later hotel operator who lived from 1877 to 1939. The black and white photos come from glass plate negatives and have been digitized for online viewing. 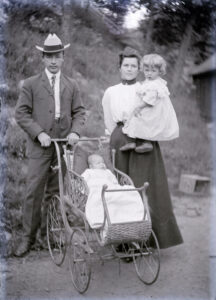 Frank and Mattie Fry with two of their children, from the Fry Collection at WCU.

The collection was donated to Hunter Library by Jean Sandlin Douthit, a granddaughter of Fry. Douthit also is a member of the Friends of the Bryson City Cemetery, a nonprofit group that helped facilitate the donation.

The photos taken by Fry include his family, friends and neighbors; the unincorporated community of Hewitt, where he was superintendent of the North Carolina Talc and Mining Company; and the county seat of Bryson City, where he and his wife, Martha “Mattie” Pender Fry, later owned and operated the Entella Hotel, as well as mountain landscapes and agricultural scenes.

“Frank Fry’s photographs have lovely composition, are expertly executed, and remain in near-perfect condition after well over a century of existence, which makes them quite rare and of great value to researchers,” said Jason Brady, interim chief of Special and Digital Collections. “They also offer the only views of the village of Hewitt, in Swain County, that I have ever seen, which makes the collection very exciting.

“We are so fortunate to be able to share these fascinating images and owe a debt of gratitude to both their donor, Mrs. Jean Douthit, and to the Friends of the Bryson City Cemetery, who helped facilitate the donation and identified people and places in the photographs,” Brady said.

The collection can be viewed at digitalcollections.wcu.edu. For more information, contact Hunter Library’s Special and Digital Collections at 828-227-7474 or specialcollections@wcu.edu.