One of the appealing things about Cherokee is the natural beauty of the homeland. Indeed, all western North Carolina was homeland for the Cherokee people at one time. The concept of land ownership was foreign to most Native Americans. Land could be occupied, but land and nature were resources and ownership was the Creator’s. Using more than needed was a strange concept to the indigenous peoples of the North Carolina mountains. If nature did not need to be disturbed for shelter and sustenance, Cherokee people believed that they could do nothing to improve on the work of the Creator and they left it alone.

Now, keep in mind that this is a commentary and made up of my opinion. It is not anyone else’s necessarily and definitely not reflective of the opinion of the One Feather or the Tribe; simply the thoughts of one tribal member. 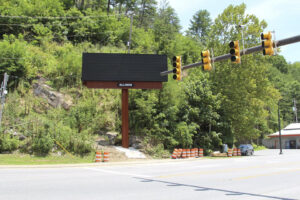 A new digital billboard has been placed at the intersection of Acquoni Road and Hwy. 19 in Cherokee. (ROBERT JUMPER/One Feather photo)

I was mildly curious when, a few weeks ago, traffic in one lane downtown was routed around some construction occurring at the intersection of Hwy 19 and Acquoni Road. You run into those types of things all the time on streets, and I assumed it was some sort of utility or road repair. They are barely more than a nuisance and are soon cleared so that traffic gets back to normal.

But week after week, this construction continued and in the last week of traffic disruption, large pylon pieces were on the side of the road. After making a few inquiries at work, I was told that this construction was a large digital billboard. And within days of being told what it was, the completed sign was in place. As of this writing, no messaging has appeared on the billboard, but it looks like it is ready to go.

It is a westward-facing sign, so you can’t see it when you are driving through town. But, coming east from the direction of Bryson City, driving down the hill to cross the bridge on Hwy 19 into town, the billboard is a large presence and it isn’t even lit up yet. From the Cherokee First Baptist Church looking downtown, it would be most prominent looking diagonally across the bridge.

So far, I have asked EBCI Planning, Realty, Attorney General’s Office, and the Executive Office about the billboard. The Chief was kind enough to advise that indeed, a variance was granted by the Business Committee to allow the placement of the billboard. I even reached out to the billboard company through their email customer line, but they did not respond to my inquiry.

The AG’s office advised that we (the One Feather) could obtain a copy of the “minutes pertaining to the discussion of the sign”. Tribal Realty is the repository for the documentation of the Business Committee meetings. How it is documented is not in the traditional minutes format. Minutes are typically a summary of discussion and actions taken by a body. The Business Committee meetings are documented in word-for-word transcriptions by an outside transcription company located in Asheville. Very similar to a court stenographer, a representative of the company comes to Business Committee meetings and does an audio recording of the meeting, takes those recordings to Asheville and does a verbatim printed version of the meeting to send back to the Tribe. At least that is how I understand the process. Now, it can take weeks or even months for that documentation to return to the Tribe, depending on the workload of the transcription company.

For any tribal member to do research on any issue, like the billboard installation for example, would require patience and tenacity. Materials that should be readily available to the citizenry are kept in such an antiquated format that it could take months to extract the information to be made available. And in the fast-paced world with officials with tens, if not hundreds, of items on their plates, having your request stay top-of-mind with them will be entirely your responsibility.

So, I wanted to talk about the size of the billboard, other than to say it is big, but so far, no one contacted has been able to comment. I wanted to explain to you what was waived and why, but that information is not available. None of the transcription is likely to be available for some time. I am requesting some information from the Office of Planning and the Attorney General’s Office, but, at the time of this writing, responses are in progress.

This billboard is a significant departure to signage in the downtown area and looks to be a reversal of the vision of Article I of the Cherokee Code. Great authority is given to the Business Committee on all matters concerning the Qualla Boundary economy, with some decisions not having to be reviewed by Tribal Council.

Section 136-8 states, “Variances shall be submitted to the Planning Office for review and forwarded to Business Committee for approval or denial.”

Acceptable variances are not defined in the billboard section, so one must assume that any part of the billboard requirements could be waived by Business Committee. The date of adoption of most of the ordinances pertaining to the billboard section of Tribal Code is 2012. In 2012, Tribal Council wrote into law that “Billboards shall not be allowed within the Business District of the Qualla Boundary of the Cherokee Indian Reservation.” And then it defines the business district to include US 19 and Acquoni Road (the new billboard sits at the intersection of these two roads).

Continuing, Section 136-6(b) indicates that those existing billboards must be removed “within three years of the effective date of this article, or upon termination of the present lease, permit, or license, whichever is earlier (Ord. No. 310, 11-5-2012).”

There may be good reasoning for allowing existing billboards to remain in place. Maybe they are not close enough to the roadway or maybe they provide some positive community service. But, there seems to be a clear intent in the construct of the law to eliminate billboard advertising from the downtown or “Business District” area. Now, granted, there was a billboard previously in place at the corner of Acquoni and US 19. But, it was not in the same location on the corner as this new digital billboard. And, you will have to be the judge.  It is just my opinion that the intent of the law based on 136-3 was to eliminate billboards in that area.

Allowing this billboard seems, at least on the surface, to be less restrictive than the article allows.

One reader asked why bring this up since it is a “done deal”?

I guess my answer would go back to my first few sentences in this opinion piece. Do we need another billboard in the downtown, especially one that will be illuminated and, if they have more than one message on it, animated? The community’s definition of progress is different than general American society’s definition of progress. Surely, we, culturally speaking, take what we need – electricity, fuel oil, internet connectivity, cell phone service, and the like. These have become necessary for our existence. But we decided that when possible, we would consider aesthetics in relationship to our culture. We have struggled with the look of the downtown for as many years as I have worked with the Tribe. Particularly in this case, as is borne out in the language of Section 136, this billboard represents a significant shift from the direction we had previously expressed.

There is an ongoing debate about the transparency of our government. Sorry, I know that word “transparency” is so overused that you audibly moaned when I used it. But, I am about to use another. I feel that the things that keep us from being as transparent are systemic. It is not the fault of those on the ground in these offices who house the information, nor is it the fault of our elected leadership per se. It lies in antiquated systems that do not serve the Cherokee people in the way it should in a modern society. Its in antiquated policies and regulations that also are not effective in a modern Cherokee society. I believe we have good people trying to do good things but are hindered by old rules and old processes. It will take true focus and true commitment to true transparency to reverse the systematic failures of our processes of governance.