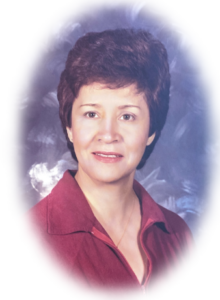 Mary Ross Visage, 82, a member of the Eastern Band of Cherokee Indians (EBCI) from Blairsville, Ga., made her journey to her heavenly home on Wednesday, June 24, 2020. She was the daughter of the late McKinley (Mac) Ross and the late Lily Mae Cagle, both of the Yellowhill Community. Mary is preceded in death by one brother, Robert (Bob) Ross of the Yellowhill Community; one sister, Jessie Ross-Swimmer of the Big Cove Community; and one son, Myron (Mike) A. Ledford of the Birdtown Community.

Mary was born and raised in Cherokee and was a proud member of the EBCI. She was a devout active member of the Jehovah’s Witness until she could not physically be, a NAIWA member for many years, she loved to cook, and do embroidery. She was also a very hard working woman. She earned retirement after 34 years at the Bureau of Indian Affairs (BIA), and worked five years in social services. She would sometimes work two or three jobs even while raising her kids.

Mary was a very kind and loving woman. She will always be remembered as the epitome of what unconditional love is. She took time to be intentional with the way she loved each of her family members, and as well as her beloved friends. Grandchildren of hers can recall her beautifully humming soothing tunes while doing busywork like cooking and cleaning, and she would also tell fairy tales to her grand-babies. She was a very gentle woman. She would make sure to message each of her family members to let them know that she was thinking about them, and was a pro with using emojis. She loved to take a trip home and invite all the family to come eat lunch at Granny’s Kitchen. One thing that will always be unforgettable were the hugs that she would give. When she embraced people into her arms, you could actually feel the warmth and love radiating from her.

As she would say in the last few months she spent here on earth with us… “Love you mucher.”

Mountain View Funeral Home of Blairsville, Ga is in charge of the arrangements. You may sign the family guest book and send condolences online at www.mountainviewfuneralhome.com