The Hindman Settlement School, which opened its doors in 1902, has developed a reputation as one of the best networks for Appalachian writers.

Recently among that group of artists is Annette Saunooke Clapsaddle, a member of the Eastern Band of Cherokee Indians who is having her first book published later this year with the University of Kentucky Press.  “Even as We Breathe” is set to hit shelves this fall. 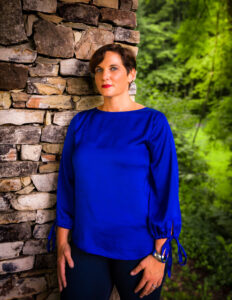 Annette Saunooke Clapsaddle, author of the upcoming novel “Even as We Breathe”, is a member of the Eastern Band of Cherokee Indians. (Photo by Madison Hye Long)

She began attending the Hindman Settlement School’s Appalachian Writers Workshop in 2018, and she says it has been crucial for getting her to where she is now.

“Its community of writers is really unique. Once you go there one year, typically you’re just kind of addicted to it and keep applying. Because it’s really a great network of friends and support for writers. I communicate all year long with folks that I have met there.”

Clapsaddle will be taking part in the discussion series on the Hindman School’s Facebook page this Thursday, April 23 at 8 p.m. She will be speaking with author Silas House, who also happens to be editing her novel.

The series will be going on all week, with at least two authors talking each night. They will be discussing their writing and process, as well as offering a reading from their works. There is no cost to watch the streams, but they will be accepting donations and holding an auction all to raise money for the Mike and Frieda Mullins Scholarship fund.

“What that does is provide the scholarship to first-time attendees to the Appalachian Writers Workshop that is through Hindman Settlement School in Kentucky,” said Clapsaddle.

This scholarship aims to bring in the best talent possible into the school, especially those that may not be able to afford the price of the retreat.

This is the first time for a fundraiser of this sort, and it comes out of necessity. In recent years, Wesley Browne has taken the lead on raising money for the scholarship. Browne, who attended the Hindman School for several years, and his family are part owners of Apollo Pizza in Kentucky. They would host the Pages & Pints Reading series at their locations to raise money for the fund and would cover whatever was left if needed.

Now, because of the mass-cancellations caused by the COVID-19 outbreak, that sort of fundraiser is no longer an option.

“We hope to get one full scholarship. If we don’t come in, Apollo will, as we normally do, make sure that we fund the difference. And if we raise more, one of the folks that helped organize this, Silas House, he also has a scholarship in the name of his aunt. So, it would spill over into a second scholarship we were to be lucky enough to raise enough for more than one scholarship.”

Browne attended the Hindman School’s workshop for five years before working with the organizers on the scholarship funds. Browne said during his time is when the push for a varied class of writers started.

“There weren’t a lot of young people there; it was a largely older crowd. And there was a feeling that there needed to be an effort made to get some new, younger talent in there. You know, it’s not inexpensive to attend. So, for some young people, it was cost-prohibitive to go. Myself and few other of the people there … we kind of put our heads together.”

Browne said that while the learning experience is tremendous at the school, it’s often the interaction that leave you wanting to come back.

“Not everybody there is alike, but there’s a certain kinship between people who write and kind of the way they think about the world and see the world and observe things. It’s really pretty intoxicating to spend a week with friends who have a real similar mindset.”

Browne’s book, Hillbilly Hustle, was published in March of this year. He is also scheduled for the first night of discussions on Monday, April 20. The series runs Monday through Friday, each night starting at 8 p.m.

The first year Clapsaddle came to the Hindman School was on scholarship, the Nikki Giovanni Scholarship for writers of color. She said that this, along with her affinity for the school and the writers, was why it was an easy decision to join this fundraiser series.

Clapsaddle said, “That gave me the opportunity to kind of take a risk. Because, you know, nobody just has extra money sitting around to go to writers’ workshops all the time. So, it allowed me to take a risk and check out the writer’s workshop, and I’m so glad that I did. When Wes Browne…contacted me and asked me if I wanted to be a part of this series, I mean it’s kind of a no-brainer for me.”