The position of Principal Chief affords me many opportunities to serve the citizens of the Eastern Band of Cherokee Indians (EBCI).  This past week, I was honored to represent each of you while meeting with legislators in Washington, DC. 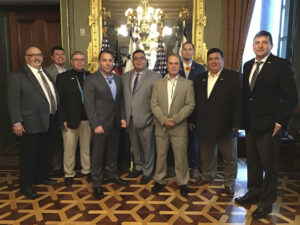 I was glad to be joined by several members of Tribal Council including Chairman Adam Wachacha (Snowbird/Cherokee County), Perry Shell (Big Cove/Towstring), Richard French (Big Cove/Towstring), Boyd Owle (Birdtown/3200 Acre), Albert Rose (Birdtown/3200 Acre), and Bucky Brown (Snowbird/Cherokee County).  I appreciate the dedication and fresh insight brought by each of these Tribal Council representatives.  They represented each of their respective communities well by relaying the issues important to our tribal citizens.

During our visit, we met with several legislators regarding Senate Bill S790 which would authorize the Catawba Nation to build a casino in Cleveland County, N.C..  We discussed details as to why we believe there is no legal pathway for the Catawba Nation to take land, which the EBCI can demonstrate are historical Cherokee aboriginal homelands, into trust in North Carolina.

The 1993 Catawba Settlement Act and the federal regulations instituted by the Indian Gaming Regulatory Act (IGRA,) which has provisions for tribes wishing to take land into trust for the purposes of gaming, demonstrate that the Catawba’s proposed process is not within the legal framework established.  We also met with individuals from the Department of Interior to express our concerns and request that they stay true to the process that has been used for all other tribes.

As they have several times previously, the Lumbee people are attempting to push legislation, H.R. 1964, through Congress to grant them federal recognition.  The EBCI have always opposed the Lumbee’s attempts to bypass the Office of Federal Acknowledgment, which was established in 1978.  The federal acknowledgment process was instituted to provide a uniform and fair process for groups seeking federal recognition based upon the provisions laid out in the Code of Federal Regulations- 25 CFR § 83.11.  While this process has been cumbersome in the past, amendments have been made to streamline the process while maintaining the integrity of the system.  If you have not done so I invite each of you to watch my Dec. 4, 2019 testimony during the hearing for the United States House Subcommittee for Indigenous Peoples.

The EBCI insists that federal recognition should be merit-based, accessible only to those tribal nations that can demonstrate that they descend from legitimate, historic tribes.  Federally recognized tribal nations represent political sovereigns that have fought for and maintained their sovereignty against all odds, even when there were no benefits for doing so.  Today, federally recognized tribal nations are entitled to a government-to-government relationship with the United States based on the sacrifices their historic ancestors made—sacrifices enshrined in treaties, federal laws and court decisions.

While in DC, I had the pleasure of reuniting with Navajo Nation President Jonathan Nez.  Several EBCI representatives met with Mr. Nez during the last NCAI event hosted in Albuquerque, N.M. in October 2019.  During our two visits, we were comforted that the Navajo people share some of the same concerns as EBCI representatives.  We were pleased to discuss political issues that not only affect both our tribes, but Tribal Nations across the United States.  As tribal leaders, it is crucial that we develop these relationships with fellow federally recognized tribes so we may partner on mutually beneficial endeavors.  It is only through cooperation that our voices will be heard and our issues will be taken seriously.

One issue that emanated throughout all our conversations with leaders of federally recognized tribes was their growing concern about the impact of state recognized tribes.  These tribes oftentimes appropriate the names and cultures of federally-recognized tribes resulting in confusion by those not educated on Native Nations issues and threatening the sovereignty of tribes who have fought for centuries to maintain their identity in the midst of political and social pressure to assimilate.

One example of the manipulation used by state recognized tribes is their seeking and being awarded federal 8A contracts based upon their claims of Indian ancestry.  The Los Angeles Times published a story this past December outlining the specifics of tribes who either have sought federal recognition and have been denied or have only sought state recognition receiving upwards of $500 million in federal funding under the 8A contracting guidelines which have been established to help companies owned by individuals who are socially or economically disadvantaged.  It is imperative that we bring together leaders of federally recognized tribes to strengthen our position that the integrity of federal recognition be protected based upon political designation offered only to groups with ties to historical treaties and relationships.

I am happy to speak with any tribal citizen would like additional information on our visit to Washington, DC.  Again, it is an honor to represent each of you and I look forward to continuing my work to build a coalition of support to protect the needs of federally recognized tribes.