COMMENTARY: Something fishy at the Fairgrounds

For years, the Cherokee Indian Fairgrounds was an “animal prize” free zone. I know because I was the one who instituted the policy during the years that game vendors with live prizes were turned away. This year, for whatever reason, that policy was reversed or ignored.

The reason I chose to keep live animal prize vendors off the grounds is my convictions against animal cruelty. Don’t get me wrong; I am not one of those who think fishers, hunters, and zookeepers should be banished from the planet. Many of those groups are animal conservationists, some by accident and some on purpose. For example, hunters help control prey game whose populations would explode beyond our ability to feed them because changes in the environment have eliminated or retarded natural predation. The same is valid with fishers. In the case of zoos, those animal keepers, when providing suitable, clean environments, allow domesticated animals and wild animals that have become a danger to themselves or society and are unable to return to the wild, a place to live out their remaining years and remind us through education what conservation is all about. 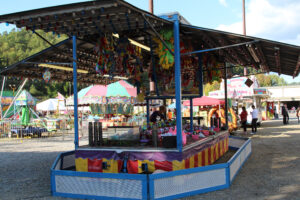 At the carnival at this year’s Cherokee Indian Fair, goldfish and turtles were given as prizes for some of the games. (ROBERT JUMPER/One Feather photo)

But, there are instances where we, as a people, show our disregard for the sanctity of life. We show how inconsequential life is to us, even life as small as a goldfish or a turtle. We, as a native people, have revered life, all life, in our faith and culture. It is a common theme among tribes; the love of natural things and life being chief among them. A common theme in native cultures is the belief that all animals have spirits and are to be treated with respect.  You will see in many of the histories of Native tribes’ that they respected life so much that, when they killed an animal they prayed to the Creator for having to take the life and prayed thanks to the animal. Animals were not to be treated inhumanely, and killing an animal had to have a purpose in Native cultures. It was part necessity, part tradition that when an animal was taken, all parts of the animal would be used for the continuation of the killer’s life. Meat and fat were taken for food. Hides were taken for shelter and clothing. Bones were used for weapons and utensils. Animals were not traditionally killed for a quick profit or personal gratification.

From an animal perspective, it is cruel and inhumane to deprive animals of a living environment conducive to their survival. Average day temperatures at the Fair have been in the seventies and eighties. The ideal water temperature for the common goldfish is between 65 and 68 degrees, which is cooler than tropical fish aquariums. The fish at the Fairgrounds are at an open carnival booth in a 10 to 20-gallon tank. Giving the benefit of the doubt, the fish may be in a livable temperature while in the aquarium. Oxygen is another consideration for the fish. Fish “breathe” oxygen from the water. Oxygen is transferred to the water through the surface of the water, where the water meets the air; the less exposed surface area in the tank, the less its capacity to sustain life. Fishkeeping experts say that, for goldfish, the rule of thumb is one fish for every 10 gallons of water. So, for a 20-gallon tank, the maximum capacity would be two goldfish. It is possible to artificially infuse oxygen into an aquarium with an air pump or bubbler, but I did not see one in use at the tank at the Fair. Also, in that tank, there were 30 or more goldfish.

These goldfish were there to be given for prizes if you played and won a carnival game. If you win, the vendor takes a small clear container, possibly holding two pints of water, scoops a goldfish out of the aquarium and deposits it in your little container. Now, you have been given an already stressed goldfish that may already be oxygen-deprived in a container that cannot possibly sustain its life for than a couple of hours, maybe even minutes. What do you do?

From a human perspective: I was taking my turn at the One Feather booth where we were taking entries for our camera giveaway. A fair-goer came by the booth and was carrying one of the little, water-filled, plastic containers with a small body inside it, floating at the top of the water. The lady carrying the container hadn’t noticed that she was carrying a dead body around the Fairgrounds as she enjoyed shopping and sightseeing at the Fair. Dramatic? Possibly. Reality? Absolutely.

Teaching our children the value of life is essential. Some of our adults need the same education. We worry about video games messing up our kids’ minds when they enter a fantasy world and experience simulated death. What do you think it does to a person’s psyche when they experience the death of a real living creature, and it is treated as a sideshow at a carnival or something to be dumped in a big green trash can at the Cherokee Indian Fair? If any of you think that any life is tiny and meaningless, I believe more’s the pity. We should not get so preoccupied with our momentary satisfaction that we ignore suffering and death, no matter how small that life may be.

Also, from a human perspective: Reptiles are known for their disease-carrying capacity. Most states have banned the sale and transfer of turtles because of the turtles’ tendency to carry Salmonella. “Salmonella infection (salmonellosis) is a common bacterial disease that affects the intestinal tract. Salmonella bacteria typically live in animal and human intestines and are shed through feces. Humans become infected most frequently through contaminated water or food. Typically, people with salmonella infection have no symptoms” (www.mayoclinic.org). The fact that turtles are known to possibly carry this bacterium prompted the Federal Food and Drug Administration to ban the sale and transfer of “baby” turtles. Now, there is a caveat in the United States Department of Agriculture (USDA) concerning the distribution of turtles over four inches, which looks to be the case at the Fair, that it is acceptable to sell those. I guess the reasoning is that people are less likely to handle the larger turtles. They still are bacteria carriers, just less likely to be in contact with people. Still, it is disheartening to see turtles, which are revered in our Cherokee stories and part of our Cherokee culture, in a fish tank in a prize booth at, of all places, our Cherokee Indian Fair.

These are not stuffed animals or balloon figures. They are living, breathing creatures. “I think I will go to the Fair and win myself a pet,” said no one ever. We do not honor ourselves or these animals by allowing this practice to continue. There is no honor in the needless suffering of any creature, great or small. I hope that our tribal leadership will consider a complete ban on this practice.