Destiny Mills used her platform to spread her culture and grow

Destiny Mills, who has held the title of 2018-19 Teen Miss Cherokee, knew she had a lot to learn when she stepped into her role.

She said that public speaking was never her strongest skill, and just preparing for the pageant in 2018 was stressful.

“It just took me some time to be able to go up to people and introduce myself. But, I realized I had to be a role model for Little Miss Cherokee and Junior Miss Cherokee so that definitely helped me come out of my shell,” said Mills. 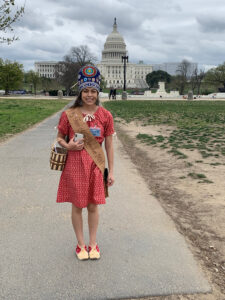 Teen Miss Cherokee Destiny Mills is shown in front of the U.S. Capitol Building in Washington, D.C. She was in Washington attending the Cherokee Days event at the National Museum of the American Indian earlier this year. (Photo courtesy of Rose Mills)

She said that over time, though, she came into her own.

“I loved traveling and meeting new people and getting to talk to them. It was really fun. Especially getting to connect with them and learn their culture as well as share my knowledge of the culture here.”

She traveled to Raleigh; to the Mississippi Band of Choctaw Indians; Washington, D.C.; and Tahlequah, Okla. during her time as Teen Miss Cherokee, not to mention constant local events. Mills says that she enjoyed being able to talk to people about her culture and that they often asked her about the outfits she wore.

“It felt really good to be able to connect in a different way. Especially when they would ask me, and I was able to say I made it myself. Just to see the look on their face was really rewarding.” 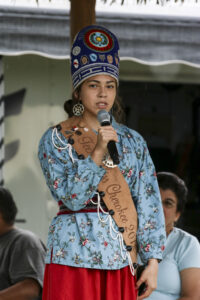 Teen Miss Cherokee Destiny Mills is shown addressing the crowd at the Cherokee Voices Festival at the Museum of the Cherokee Indian on June 8. (SCOTT MCKIE B.P./One Feather photo)

She says that it’s been an honor to take on the role, but the workload has been more than she realized.

“Before I knew what it was like, I thought it would just be going to different places and showing up.”

Mills said that the pressure can build and at times she’d have to put her title above any other interests.

“Especially when I had to make sacrifices with my personal life, it definitely got overwhelming,” said Mills.

From the beginning, her family was always there to support her. Rose Mills, her mother, was especially involved.

“She has her license now, but before she got her license, it was really time-consuming. Because she has sports, my other daughter is 13, and she participated in some events. It’s wake up at 5:30 in the morning and lay your head down at 11:30 at night,” said Destiny’s mother.

Rose Mills says it took a lot of work with her job and her family to support Destiny, and that it was all worth it.

“I’m very proud of her for learning our traditional ways and just representing as an ambassador for our Tribe.”

Destiny said that her friends helped to keep her grounded throughout the process, as well.

“I have tried to keep my same personality as before, and they haven’t treated me any different, and I’m thankful for that.”

Destiny says that she’s going to stay busy after her reign is over too. She’s currently a junior at Cherokee High School. She plays softball, is on the varsity cheer squad, is part of the homecoming court, and is a member of HOSA.

She’s already planning her future as well. She was selected to the Leadership Enterprise for a Diverse America (LEDA) summer program at Princeton University. She’ll spend eight weeks at the campus training. The following comes from LEDA’s website: 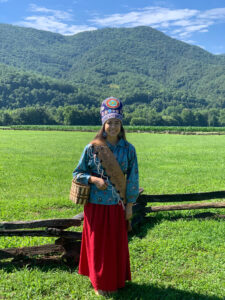 “LEDA Scholars receive leadership training, writing instruction, standardized test preparation, and a year of highly personalized guidance as they navigate the application and admissions process at the most competitive colleges. Throughout college and beyond, Scholars are offered ongoing advising, career counseling, postgraduate planning, and community-building support to help them succeed and lead.”

She’s already spent a week learning from the STEM program at Emory University, and just this week, she received a similar invitation at Johns Hopkins. Mills has started looking at colleges, marking the University of Cincinnati as one of her top choices so far.

“I plan to go to college, and I then plan to go to medical school to become a pediatrician. I would wish to come back to Cherokee and work here,” said Mills.

Mills has plenty of time to study her options and make her decisions, but she says she’s ready for the next step. There’s no doubt that a lot has changed in one year.