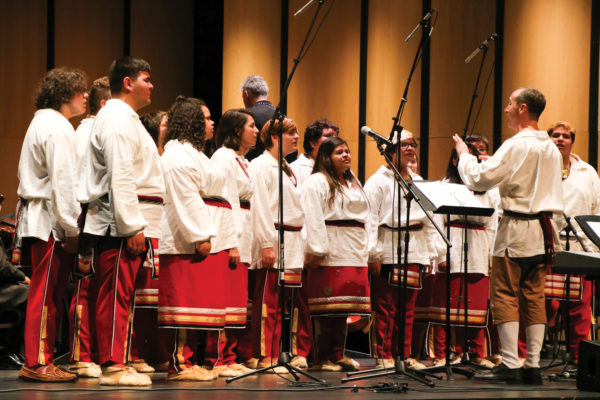 The Cherokee High School Choir performs “Si Otsedoha” with the North Carolina Symphony last October at the Chief Joyce Dugan Cultural Arts Center. The group is currently doing fundraising projects to pay the $7,000 to have the score of the piece reduced so they can perform it more often. (SCOTT MCKIE B.P./One Feather photo)

Fifteen pairs of shoes take the stage. A butterfly festival inside, and beads of sweat running past their eyes as they gaze out at 1,500 people.

This was the world premiere of Cherokee High School Choir’s show “Si Otsedoha”. It’s not as if they were performing in their back yard, either. It was a packed crowd at the Meymandi Concert Hall in the state’s capital. It was a chaotic day, but everyone in the production knew how important this was.

“I’m glad I’m not alone, I’m glad I’m with these people and that we’re all doing it together.”

Those were the thoughts of Kimberly Hendrix, who is now a senior at Cherokee High School (CHS). Though that was her thought process, it was a shared feeling across the choir.

“I think my first initial reaction was, ‘just breathe,’” said Cece Lambert, who is also a senior at CHS.

Fifteen individual breaths from the choir, the first notes from the symphony, and the show began.

“Si Otsedoha” is a production that comes in five movements.

The first movement has each member of the choir step up and tells the audience about something traumatic that has happened to the Cherokee over the last 400 years.

“The audience reaction was pretty powerful. I don’t see it, but the kids see it. That when they’re telling these different things, the audience is looking up at them like, ‘oh my god.’”

The third movement was a late edition. Kyra Sneed, one of the quietest members of the choir according to Yannette, wrote a poem titled “When Money Becomes Religion”. During a meeting of the group and the orchestra, she told everyone about this poem and read it for them. Everyone was so blown away that it became another movement. The poem was spoken as a solo by Ella Montelongo and accompanied by the orchestra.

The fourth is called ‘Walls of Glass.’ It examines the idea of tourists and outsiders to the region looking in at the people of Cherokee. It came from a conversation that Eason Esquivel, who has since graduated from CHS, had with the composer of the production, William Brittelle. Esquivel said that it feels like these people are looking at them through walls of glass, and don’t see the Cherokee people for who they are.

The final movement is the name of the show, Si Otsedoha. It translates to ‘we are still here,’ which is the idea behind the entire production.

“We are not what’s on TV. We are warriors for peace, not the savages on screen. We have survived so many things.”

These are some of the words that ring through the ears in the audience. They see this performed by high schoolers. High schoolers who are singing over music that Yannette says made him cry the first time he heard it.

“This isn’t just a piece. This has a real cultural ambassador flavor, and these kids are meant to go do this,” said Yannette.

Yannette and the choir are now planning to travel to do shows at different venues. Currently, that is difficult because the score was created for an entire orchestra. To make the show more portable, they are turning to the services of William Brittelle, the New York-based composer who made the original score.

Pending the funding of the project, Brittelle will reduce the score of “Si Otsedoha”. This would allow the show to be put on by seven or eight musicians opposed to a full orchestra.

“What I do is write orchestra music or scored music, I’ve never done anything like this, and I don’t know of any other project that exists like it.”

Brittelle, who was born in North Carolina, has been working with Cherokee Central Schools for about four years. He has spent a significant amount of time in Cherokee to get to know the people and the culture.

“I feel like I learned a lot more from them than they learned from me. It was much more about a peer-to-peer collaboration,” Brittelle said about the CHS Choir.

He created the score with the help of the kids. At the beginning of the process, three leaders of the choir – Lambert, Esquivel, and Montelongo – formed together to create a planning committee for the production. They decided upon creating a questionnaire to understand precisely what the kids of Cherokee Central Schools wanted people to know about them and their culture.

This is where the show gets its name. Si Otsedoha, we’re still here.

Right now, Yannette is in the process of fundraising. It is going to cost about $7,000 to have the score reduced. The majority of that would be to pay Brittelle, who would need about three months to do the job.

Yannette is also going to be working on a grant to raise additional funds for the program and future shows.

It has been quite the process for Yannette and the program to get where it is now. The biggest struggles came with just doing it for the first time. He calls this current group of leaders ‘The Trailblazers.’

“When we first started, these guys were only like in seventh grade. And yet, I really couldn’t get the high school engaged…it was these guys that were coming after school all the time,” said Yannette.

“Their impact is so big because they were willing to jump out there when nobody else was doing it and made it…these freshmen, it’s so much easier for them to do it because they did it.”

Michael Yannette has done a lot for this program already. He has built it year-by-year and has worked with the middle schoolers to have them ready to perform when they get to high school. That also means he has a strong relationship with the kids that are in his program.

“There’s no words to describe how much he means to me. He’s like a dad,” said Hendrix.

“Because he’s seen me whenever I was shy and scared of everything. He really pushed me and helped me conquer those fears of talking in front of a crowd and just speaking for myself.”

William Brittelle noticed that Yannette was different early in the process.

“It feels like destiny, and it feels like he’s making a huge difference. I know I never had a music teacher that even approached how special he is in school. And I would extend that through my collegiate and post-collegiate training as well. I think he’s really one of a kind,” said Brittelle.

Once they get the funding for this project, Yannette and his program can look to do more shows across the region. They already have multiple dates booked to perform this show: Nov. 18 at the State School Board Convention in Greensboro, Nov. 22 at the State Capitol, Nov. 24 at the National Gallery of Art in Washington, D.C., and Jan. 31 and Feb. 1 with the Charlotte Symphony. They also have a date planned in Asheville.

Yannette says that he is going to keep building this program because he loves it at Cherokee. He says that he has never felt the support he does now. And ‘The Trailblazers’ that are looking at that next step in life are going to do whatever they can in the time they have left at CHS.

“I know that in a few years down the line when I’m done with college, or wherever I go after high school, I can come back and know that I had a little part in making all of this. And that’s just something I can hold onto for the rest of my life,” said Lambert.