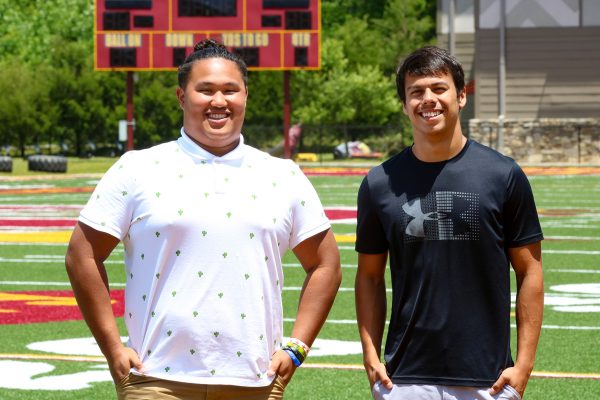 Joaquin “Jack” Layno and Blake Smith have been named Cherokee High School’s Class of 2019 valedictorian and salutatorian respectively. They are shown on the afternoon of Thursday, May 16 at Ray Kinsland Stadium where the two played football for the Braves. (SCOTT MCKIE B.P./One Feather photo)

The two top students in Cherokee High School’s Class of 2019 have a lot in common.  Joaquin “Jack” Layno and Blake Smith, named valedictorian and salutatorian respectively, are both stand-out athletes having represented the Braves together on the varsity football, basketball, and track and field teams.  Both were members of the 2017 1A State Championship football team.

“Being valedictorian is a great honor for me,” said Layno.  “It means a lot.”

Being an athlete, he hopes that being valedictorian will help break down stereotypes and help to inspire others.  “It gives others something to look at.  You can still play sports and be good at sports and still be smart.”

Layno said education has always been a priority.  “You have to study hard, and I want to thank my parents for pushing me through everything.  When I got home from practice, they encouraged me to study.  There are no off days – even during the summer I study.  I also want to thank my coaches.  They didn’t just coach me through the sports world, but they also coached me through life.  And, I want to thank all of my teachers – they’re the reason why I’m here.”

Layno will attend Western Carolina University this fall where he will play football.  He plans to major in either engineering or physical therapy.

Smith stated, “It feels great.  Everything I do, I try to put everything I have into it and put a lot of effort into it.  It feels really great to be one of the top students.  I would like to thank all of my coaches; my mom and my dad, they really motivate me every day; Teresa Santa Maria, my nurse; and my teachers like Mr. Robertson and Mr. McGaha – I feel like they really prepared me for college.”

He will attend East Tennessee State University, in Johnson City, Tenn., this fall where he plans to major in business.

Dr. Debora Foerst, CHS principal, said, “It is extraordinary for Blake and Jack to earn all of the accolades they have during their four years here at Cherokee High School – State Champions in football, multiple playoff berths in basketball, competing at the state level in track, numerous academic and athletic awards – and also earn the two highest GPAs in their graduating class.”

She added, “We are proud of them and know they will continue making us proud as they take that Braves spirit with them to ETSU and WCU!”

Layno and Smith will give their addresses as part of the CHS graduation ceremony scheduled for Thursday, May 23 at 7 p.m. at Ray Kinsland Stadium.