Mound deed to be transferred to Nikwasi Initiative 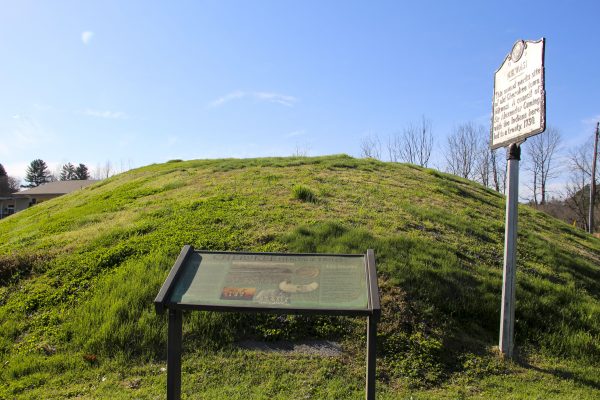 The Nikwasi Mound, shown in this photo from Monday, April 1, is a site sacred to the Eastern Band of Cherokee Indians (EBCI) and was put on the National Register of Historic Places in 1980, being listed there as Nequasee. (SCOTT MCKIE B.P./One Feather photos)

The Nikwasi Initiative non-profit organization will soon have the deed and responsibility over a sacred Cherokee mound in Macon County.  Following unanimous approval by the Franklin Town Council on Monday, May 6, the Town of Franklin will transfer the deed for the Nikwasi Mound to the non-profit.

The Nikwasi Initiative is a partnership between the Town of Franklin, the Eastern Band of Cherokee Indians (EBCI), Macon County, and the Mainspring Conservation Trust.

“This project has enormous potential for the town and the region,” Barbara McRae, Franklin vice-mayor and co-chair of the Nikwasi Initiative, said in a statement.  “Its history is fascinating and unique.  It has meaning to all of us in Macon County, as well as the Cherokee, and is a treasured part of our heritage.  And, it has national significance.  We look forward to the opportunity the coalition offers to tell this story and create a beautiful public place around it.”

The Nikwasi Mound is a site sacred to the Tribe and was put on the National Register of Historic Places in 1980, being listed there as Nequasee.

Principal Chief Richard G. Sneed said in a statement to the One Feather, “I am very pleased that the Franklin Town Council voted unanimously to convey Nikwasi Mound to the Nikwasi Initiative.  The vote by the Town Council solidifies the partnership between the Eastern Band of Cherokee Indians, the Town of Franklin, and the Nikwasi Initiative. We are very excited about what the future hold for all the partners in this venture.”

Officials from the Nikwasi Initiative stated that following the deed transfer, their organization “will coordinate with EBCI’s Tribal Historic Preservation Office regarding mound maintenance”.

Juanita Wilson, an EBCI tribal member and co-chair of the Nikwasi Initiative, said in a statement, “I woke to the news of the unanimous vote.  My heart skipped a beat.  I could hear my ancestors sigh.  In my mind’s eye, I can see the Nunnehi, the ‘immortals’, who historically protected these lands, and the people, nodding in approval.  I felt the winds shift, bringing a sense of renewal and unity across western North Carolina.  I woke up to a new day.”

Deputy Director of Mainspring Conservation Trust Ben Laseter said in a statement, “Last night’s unanimous decision was wonderful.  It showed the Town’s confidence and commitment to the partnership and to revitalization of the Nikwasi area.  Just as it took several years to get where we are now, it will take time to secure the resources needed to fully realize the potential of Nikwasi as a world-class interpretive site.”

During a Franklin Town Council meeting on April 1, a total of 19 people spoke on the subject that originated after the Council voted to move forward with drawing up the new deed during their March meeting.

Gloria Raby Owenby, Macon County Historical Society former president, is one of five Macon County residents who have filed a complaint and injunction against any action transferring the mound’s deed.  During the April 1 meeting, she noted, “I feel very strongly in honoring the deed.  The language clearly states that the Nikwasi Mound belongs to all citizens.  I will not waver to protect it for generations to come.  The Town has been a good steward.  The mound is basically the same as it was for 73 years.”

As of press time, no action has been taken on the complaint and injunction.

The deed, signed and enacted on Oct. 7, 1946, states in part, “The mound situated upon the property above described shall be preserved for the citizens of Macon County and for posterity, and the same shall be kept as it now stands and shall not be excavated, explored, altered, or impaired in any way or used for any commercial purpose, and shall be kept as a monument to the early history of Macon County…”

In August 2018, the EBCI Tribal Council approved legislation to purchase a 0.59 acre tract of land that sits adjacent to the Mound from the Mainspring Conservation Trust for $400,000.  Prior to ratifying that legislation, Chief Sneed said, “This is an opportunity for the Eastern Band, in partnering with Mainspring Conservation and Macon County and the Town of Franklin, for the Eastern Band to acquire cultural and historic lands that were our aboriginal homelands.  The long-term plan is to create a cultural corridor that preserves and protects historic sites for the Eastern Band, and this is just one more step in a long process that will continue until all of our lands that are important to us are protected and preserved.”

Russell Townsend, EBCI tribal historic preservation officer, gave the One Feather a brief historical account of the site previously stating, “Nikwasi Mound is a Missippian Period mound that is likely 800 to 900 years old.  It was built by ancestors of modern Cherokee people, and several ancient Cherokee stories are associated with it.  The best known story is that of the ‘spirit warriors’ who come from inside the mound to protect the community in time of need.  It is said that happened in pre-Colonial times as well as during the American Civil War.”