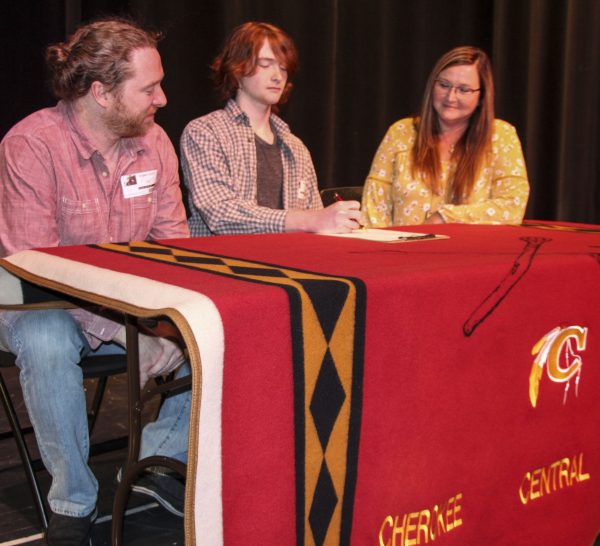 Brennen Foerst, center, a 2018 graduate of Cherokee High School, has been admitted to the prestigious Western Carolina University (WCU) musical theater program for the fall semester. He signed a letter of intent during a ceremony at the Chief Joyce Dugan Cultural Arts Center on the morning of Thursday, April 18 to attend the program in WCU’s School of Stage and Screen. Brennen is shown with his father, Shawn Foerst, left, and mother, Dr. Debora Foerst. (SCOTT MCKIE B.P./One Feather photos)

Brennen Foerst, a 2018 graduate of Cherokee High School, has been admitted to the prestigious Western Carolina University (WCU) musical theater program for the fall semester.  He signed a letter of intent during a ceremony at the Chief Joyce Dugan Cultural Arts Center on the morning of Thursday, April 18 to attend the program in WCU’s School of Stage and Screen.

According to Michael Yannette, Cherokee Central School director of choir and musical theater, over 170 students auditioned for 12 slots and Foerst was one of those selected.

“At first, I didn’t really think it was real because I doubted myself so much,” Brennen said.  “Everyone kept filling my head telling me ‘you can do it’, ‘you can do it’, but I didn’t know.  When I finally saw that I was accepted, I was shocked.”

Brennen started in musical theater with the Cherokee (Central Schools) Performing Arts Program as a senior in high school and auditioned for the WCU program in November 2018.  “I do like musical theater and performing, but in the end I kind of want to move towards directing, producing, and writing musical theater.  I am actually going to do a minor in creative writing while I’m there.  I am using this to help build my future.” 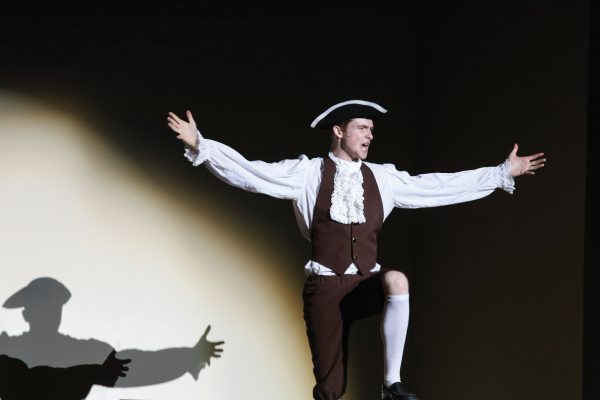 Brennen Foerst wowed as he took to the stage during a performance of the song “Molasses to Rum” from the musical “1776” during the Cherokee Musical Theater’s “Miscast” show at the Chief Joyce Dugan Cultural Arts Center on the evening of May 24, 2018.

Dr. Debora Foerst, Cherokee High School principal, is also Brennen’s mother.  She noted, “It’s super, super exciting.  I think I’ve asked him every few days since November, ‘have you checked your email?’  We were all really thrilled because he’s worked really hard.  Musical theater is new to him, but he fell in loved with it immediately.  Funny enough, I can remember when he was little running around the house performing show tunes with this booming voice.  So, we knew then that he had something in there and it’s coming out now.”

Shawn Foerst, Brennen’s father, is an accomplished musician in his own right.  “His getting interested in musical theater came late in the game so I didn’t know he was even interested in music let alone being able to excel at it.  He’s got a talent that I didn’t even think he had.  What was a hobby, an interest, ended up becoming his career choice.  It all still hasn’t seeped in, but proud is an understatement and excited.  I could not be more proud of him.”

Craig Barker, CHS assistant principal, commented, “All of our students when they go to the next level to further their education and enhance their careers, we’re extremely proud of them.  I want to express our appreciation for what you did here at Cherokee High School.  You’ve got amazing abilities, and I’m proud that you’re going on to further your education.”

Yannette, who was the pianist for the WCU auditions, said that for most students coming into musical theater, it is a slow, gradual process.  “For Brennen, it was the exact opposite.  He came in with fire and fury…his first musical theater performance was at the (Cherokee Indian) Fair where he just killed it.  He killed it.  He’s done so well in such a short time.”

Serving as the pianist at WCU, Yannette added, “I have heard every audition at Western for the last five years.  His set of auditions was, by far, the best set of auditions we’ve ever heard…he just killed it, he nailed it!”

Chryssie Whitehead Disbrow, Cherokee Performing Arts dance instructor and choreographer, addressed Brennen during Thursday’s event stating the first time she met him, “I was literally blown away.  I couldn’t believe your commitment, your song choices, and your ability to immerse yourself in a story.  That is what beautiful acting is because we have to believe what we’re saying in order for the audience to believe what we’re saying.  And, you just took me on a journey.” 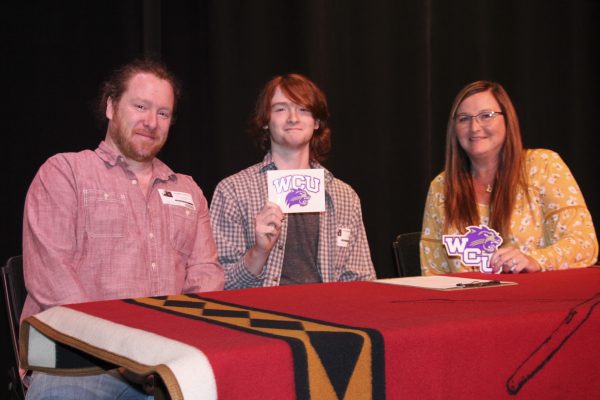 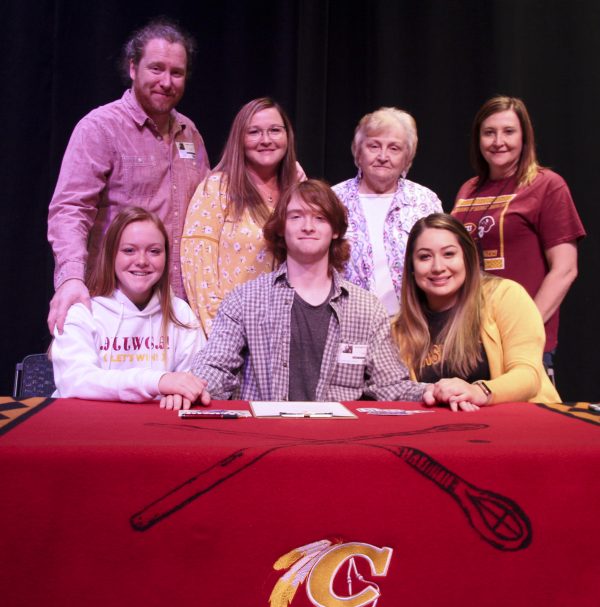 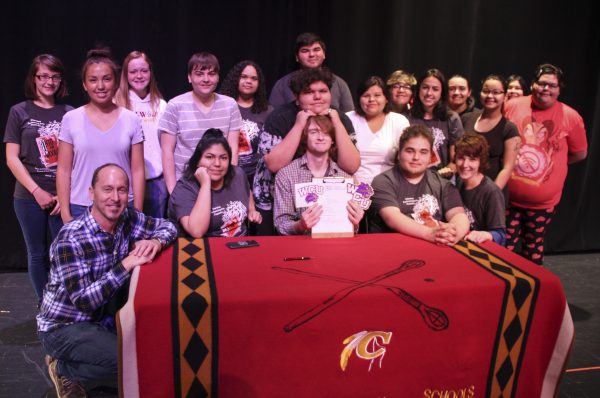 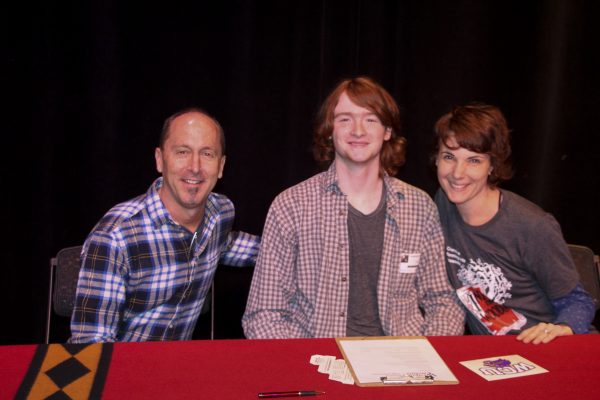 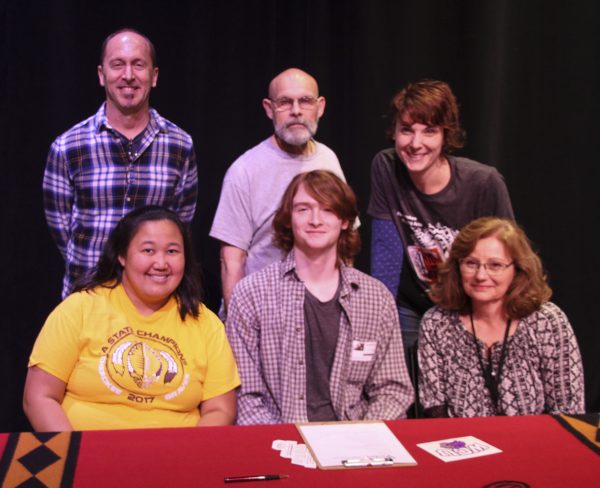 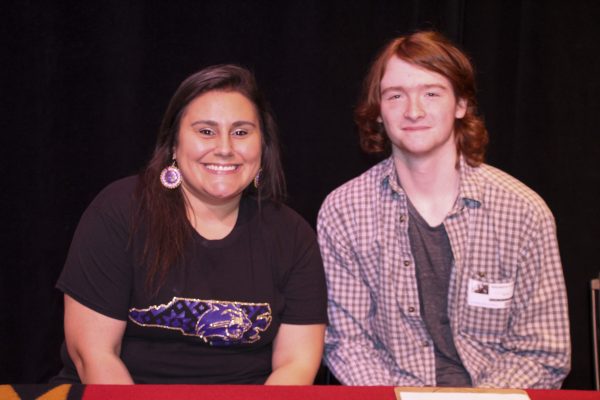