Day One fitness event focuses on recovery, health, and wellness 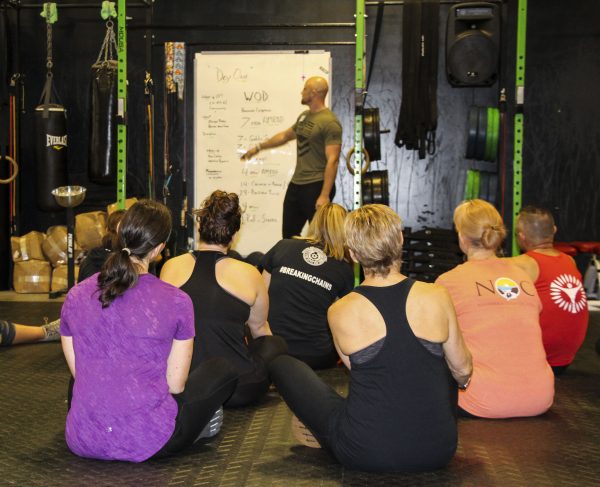 Jama Anders (standing), Crossfit 2232 owner, explains various exercises to participants at the Day One event held at his gym on the afternoon of Tuesday, Jan. 1. (SCOTT MCKIE B.P./One Feather photos)

BRYSON CITY – About thirty people started the new year off with a focus on health and wellness and how it can help with a new lifestyle for those in recovery from substance abuse.  A RezHOPE event, called Day One, was held at Crossfit 2232 in Bryson City on the afternoon of Tuesday, Jan. 1 as a collaboration with other health organizations including Spiritual Adrenaline, Shift Gym in Bryson City, and Bryson City Health and Fitness.

“We’ve brought together the fitness community from the local area to support the recovery community,” said Tom Shanahan, author of “Spiritual Adrenaline”.  “We’re really excited about that, and what we’re doing is a demonstration of what crossfit is all about for people who haven’t tried it before.  We’re trying to create a safe and welcoming environment for people who may have been in recovery and haven’t integrated a healthy lifestyle into their recovery.”

Shanahan, who was a sponsor on Kallup McCoy II’s Trail of Tears run last summer, started his book tour at the event.  “I wanted to start here for two reasons – first, I was inspired by Kallup’s run.  Anyone who can run 777 miles just blows my mind, my hat’s off to him.  And, secondarily, when I did the research on him and did the research on what was happening on the Eastern Band of Cherokee Indians territory, I was stunned to see the addiction numbers for alcohol and drugs were double the general population and that’s true of other Native American communities around the country.  It was mind-blowing to me, so I thought it was really important to start here…it’s a modern-day tragedy, and if we can make even a little bit of a difference, I wanted to do that.” 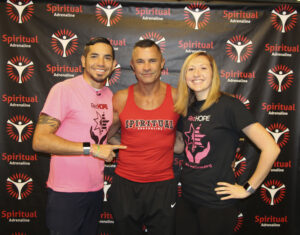 Katelynn Ledford, a member of the Eastern Band of Cherokee Indians (EBCI) and a leader in RezHOPE, spoke highly of Shanahan and his decision to start his book tour locally.  “He could have chosen anywhere, but he chose to start it here for the Cherokee people, and to me, that is so significant and is awesome.”

When asked the goals for the event, she noted, “We’re wanting to get people inspired to start off the new year with some physical goals.  Let’s start out 2019 right.  If you’re getting right mentally, emotionally, and spiritually but leaving out physically you’ll have a sway there.  So, we’re trying to bring it to people’s attention just how important it is to not only make sure that those areas are covered but physically as well.  That’s how we’re so successful in our recovery.  We get out there and go to the gym and work hard, and by doing that it sets us up to be able to tackle life the same way and to tackle recovery the same way.  As much as we are dedicated to working out, we use that same drive out there.”

McCoy II, an EBCI tribal member and founder of RezHOPE, said, “From the fitness community’s standpoint, we’re hoping people will come out and start taking their overall wellness more seriously.  So, we’ve got Crossfit 2232, Shift Gym, and Bryson City Health and Fitness in the gym coming together to support recovery.  We just want people to join a gym today and set some goals.”

RezHOPE plans to continue their partnership with Spiritual Adrenaline. McCoy II said,  “He (Shananahan) is building a curriculum that includes diet, fitness, and nutrition into your existing recovery program…I think there’s going to be some huge things coming out of this.” 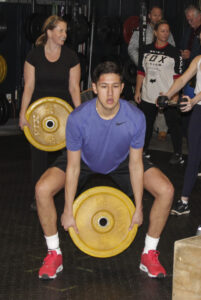 During the event, Jama Anders, owner of Crossfit 2232 who also works with Cherokee Central School athletes on strength and conditioning training, took the participants through a basic crossfit workout including squats, pushups, crunches, stretches, and more.

Casey Cooper, Cherokee Indian Hospital Authority chief executive officer, was present at Tuesday’s event and commented, “There’s nothing more important to achieving our objective.  Our core purpose at the hospital is to ensure the prosperity for the next seven generations – to have an Eastern Band in the future.  Otherwise, why do we even exist as a hospital?  I am convinced that we cannot achieve that core purpose without grassroots initiatives like this that come from the community because there’s no individual and community resilience if the solution is always in a professional system.”

He said solutions coming from community-based organizations strengthens the resolve and ability to come together and prosper.  “The other thing that I love about this is they are providing the single-most important ingredient that we need to improving the health of our tribal population, and that ingredient is hope.”

Cooper further said, “They’re demonstrating every single day that there is hope in recovery, and without that how do any of us have the motivation to get up and do what we do every day?  I think it’s vitally important.  As a matter of fact, I would argue that what they’re doing may be one of the single-most important things that the community is doing to ensure the prosperity of the next seven generations.”