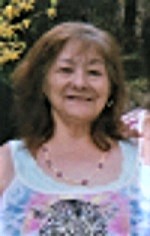 Nancy Watty Garcia, 64, of Tuckasegee, an enrolled member of the Eastern Band of Cherokee passed away on Tuesday, Oct. 23, 2018.

A visitation will be held at the Yellowhill Baptist Church in Cherokee on Thursday, Oct. 25 from 5 – 11pm a funeral will follow on Friday, Oct. 26 at 2pm.  Pastors Noah Crowe and Foreman Bradley will officiate.  Burial will follow at the Watty/Swayney Cemetery in the Birdtown Community.