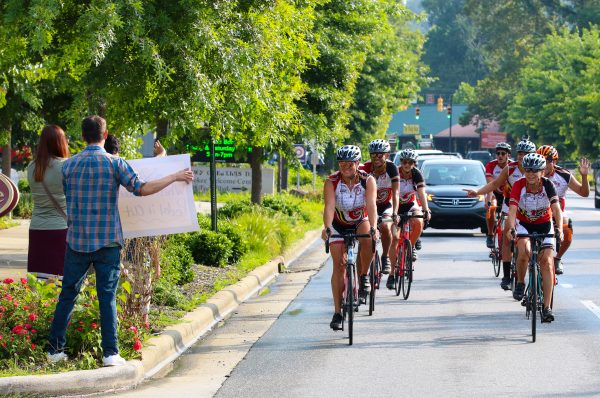 WELCOME HOME: With family and friends holdings encouraging signs, the 2018 Remember the Removal Riders from the Eastern Band of Cherokee Indians ride into a welcome back event held at the Tribal Council House on the morning of Wednesday, July 11. (SCOTT MCKIE B.P./One Feather photos)

As the sun heated small puddles of water from an early morning rain, eight members of the Eastern Band of Cherokee Indians road bicycles to officially complete a journey.  The riders completed the 2018 Remember the Removal Ride last month and were welcomed back to Cherokee officially with an event on the morning of Wednesday, July 11 at the Tribal Council House.

Family and friends of the riders held signs of encouragement, and the area around the Council House was lined with signs depicting various quotes from the riders including one from ride elder Jan Smith, “We felt their presence, shared their tears, together became one.”

The riders were recognized by tribal leaders and each received a commemorative t-shirt during Tuesday’s event.

Marisa “Sis” Cabe, Wolftown Community, completed the ride in 2016 and trained this year’s EBCI riders.  “This was an amazing group of men and women.  They had a hard six months of training, but they did it and they culminated it with this almost 950-mile ride.  There were a few bumps along the way, but they managed to come through victorious on the other end.”

The riders were each asked to share a story or perspective from the ride and Seth Ledford, a rising senior at Smoky Mountain High School from the Wolftown Community, said, “I lost my grandfather a week before the ride.  We were going up Cumberland…my chain popped off.  I was already having a hard time, and I just threw my bike in the ditch.  Took off my helmet, threw it in the ditch.  It was one of the times for a gut check.”

After a few moments, he put his helmet back on and got back to riding and finished his journey. 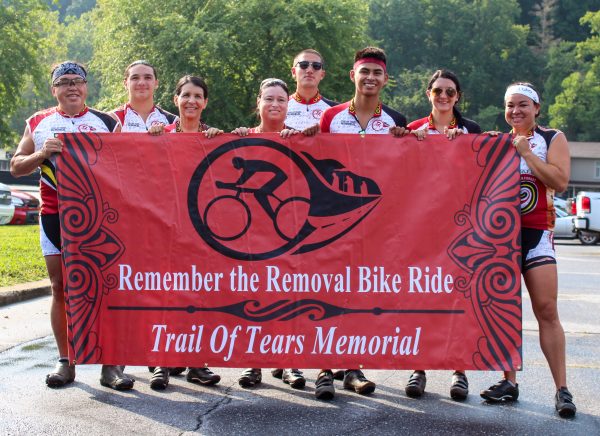 FAMILY: The 2018 Remember the Removal Riders from the Eastern Band of Cherokee Indians are shown at a welcome back event held at the Tribal Council House on the morning of Wednesday, July 11. Shown (left-right) are – Bo Taylor, Seth Ledford, Jan Smith, Lori Owle, Nolan Arkansas, Darius Lambert, Brooke Coggins, and Ahli-sha Stephens.

Darius Lambert, a rising senior at Cherokee High School from the Wolftown Community, said, “I had a lot of mixed emotions on this bike ride…I would encourage all of you to do this bike ride because it changes you in so many different ways.”

Ahli-sha Stephens, Birdtown Community, noted, “This is a life-changing journey.  You will go through every emotion and experience what adversity is and what hard work is.  You’ll learn patience.  You’ll learn teamwork – all of those virtues that make you a well-rounded person and makes you thankful for what your ancestors went through.  Even though we’re still here, you had someone who went on that Trail.  You still have a link out there.”

Nolan Arkansas, an incoming freshman at Yale University from the Wolftown Community, said, “Before the bike ride, I knew that I was always happy that I was Cherokee and content with it.  But, after this bike ride and after being given the opportunity to retrace so many critical parts of our history that were sad and happy and triumphant, I’m glad to say that now I’m proud to be Cherokee.”

Brooke Coggins, Birdtown Community, commented, “I did this ride for multiple reasons…we all talk about the community feeling and supporting one another and I said it, but I never really felt that here.  Doing this ride gave me support that I needed to experience from this Tribe.  These riders are my family now.”

She said the ride changed her life.  “I knew what it was to be Cherokee, but now I know what it really means to me specifically.” 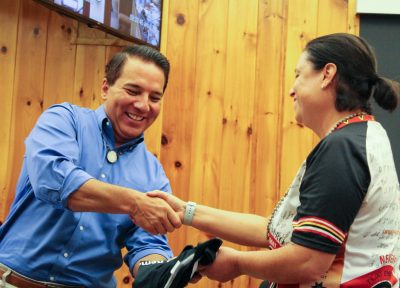 Lori Owle, Birdtown Community, commented, “This was an awesome, awesome experience that I would do again if I had the opportunity.  The team was awesome.  We had our squabbles, disagreements and stuff, but we had our laughter and our bonding.  It was awesome.”

Bo Taylor, Big Cove Community, said, “Sometimes, as Cherokees, we need to remember that we are tough and we can do things and we need to overcome.  I just want to be thankful.  I was really thankful that Tribal Council, a big bulk of you guys, were there waiting on us.  That speaks volumes to us that you support this program.”

He went on to thank Cherokee Choices for their support as well as the support he said they felt from their own families and the Cherokee community.  “When you come up to us and let us know that you support us, that means everything.  One thing I have always said is we are not the Trail of Tears.  That is not who we are.  We are so much more.  But, that’s a part of who we are.  We’ve got to remember that.”

Principal Chief Richard G. Sneed, a Remember the Removal Ride alumni, commented, “You hear the life-changing impact that this project, this ride, has on everybody’s life who participates.  It is a journey that all along the way you’ll run the gamut of emotions.  As I said in the speech I gave before they left, you will experience times of joy, times of sorrow, times of bitter tears, and times of great laughter.”

He added, “There will be angry words sometimes because it is a family, and I think that really speaks to who we are as a people.  That, in the end, we are a family and we have to choose to forgive and to love one another and to be at peace with one another.”

Tribal Council Chairman Adam Wachacha told the participants, “I just want to say congratulations again.  You’ve all been a blessing to the Tribe with your perseverance through adversity in getting through the ride.”

Big Cove Rep. Perry Shell noted, “I am proud of you as well, and I think that each and every one of you are excellent representatives of the Eastern Band of Cherokee Indians in your professional lives and your private lives in the way you carry yourselves and the way you conducted yourselves.  You reflect well on the Tribe.” 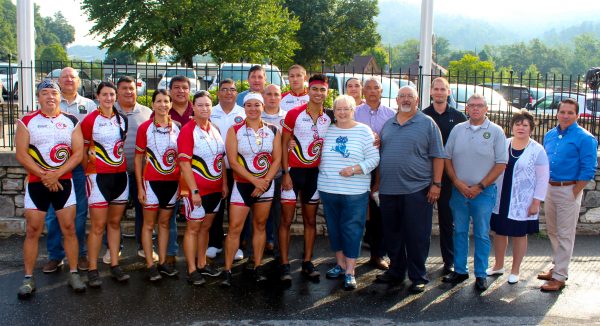