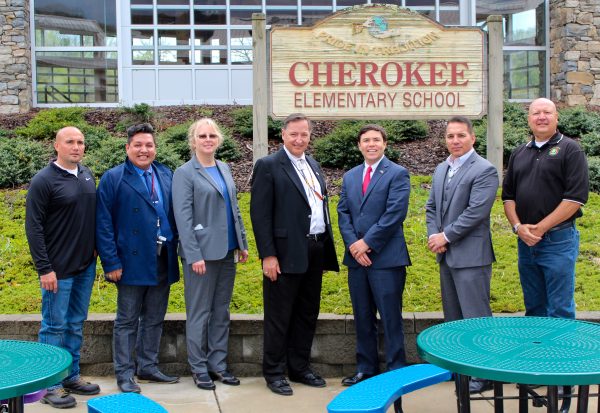 “I am so impressed by the great learning environment at Cherokee Central Schools,” Johnson said.  “From the state-of-the-art school facility to the athletics and theater offerings, it is incredible.  One of the things that made a big impression on me is how they have infused their heritage into the culture of the school.  Students have the opportunity to learn and appreciate their history while being prepared for 21st Century opportunities.”

Johnson went on to say, “The respect for nature was evident everywhere; with the use of the natural materials in designing and building the schools, and the Smoky Mountains are a gorgeous view.  My overall impression so far in visiting schools in this part of the state, is that educators are implementing some innovative and effective learning tools to help their students be prepared for success.” 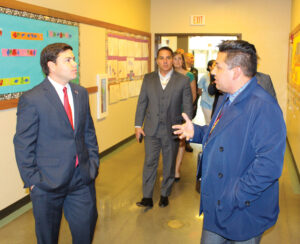 The tour, which was led by Yona Wade, Cherokee Central Schools public information officer, started at the Cherokee Elementary School and went through all three schools ending at the fieldhouse in the Ray Kinsland Stadium.

“I think it creates the opportunity for a more meaningful relationship going forward with North Carolina DPI (Dept. of Public Instruction) whereas, in the past, we’ve had to go through the network of all the people at lower echelons to try to get things accomplished,” said Principal Chief Richard G. Sneed who invited Johnson to Cherokee during a recent meeting.  “Having this government-to-government relationship with the North Carolina Superintendent of DPI, with our Superintendent, and with my office just really expedites the process for anything that may come up in the future for Cherokee Central Schools.”

He added, “So, this is a wonderful opportunity for us to showcase all of the things that we’re proud of here in the nation, and it is extremely positive for me because we’re trying to make sure that we have all of the resources that the state has with home-based and some of their data systems.  By this visit, I’m hoping to follow through and keep supporting this in Tribal Council to see if we can’t get all of the pieces so our kids are playing on a level playing field.  Because if we’re going to measure test scores as one of the indicators, and it is an indicator, then we need to make sure it is apples and apples and oranges and oranges and that we are studying and preparing for the same tests that the rest of the state is.  I’m excited that is an opportunity to do that, and they’ve not had that before.”