Kallup McCoy, an EBCI tribal member, went to the beach recently and came back with a belt buckle.  But, to earn that buckle he had to complete a 51.4 mile run most of which was on a wet beach.

“The battle is won in the mind,” said McCoy who completed the BADWATER Cape Fear race on Bald Head Island on Saturday, March 17.  “We’re our own worst enemies in anything that we do.  When we say, ‘I can’t do that’ it is pretty much just us saying ‘I’m not willing to try.’”

The race was brutal with the first 12 miles being on the roads around Bald Head Island and the last 39 being on the beach.  Running on the sand turned into running through some water later in the day as high tide came in.  He finished the race in 13 hours and 40 minutes.

“I got to the point to where I could hardly take another step, but you have to have those tools in your toolbox and tell yourself just to slow down and figure out what to do next,” he commented.  “First things first, I need to get some water. I’ve got to get some nutrition.  I need to get some sodium in my body.  It’s just a metaphor for my recovery.  That’s why I do it – to defeat the inner man.” 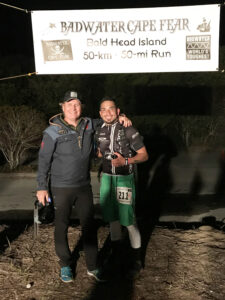 McCoy, founder of the RezHOPE Recovery and Consulting group, celebrated his one-year anniversary of sobriety on Wednesday, March 28.  He reflected that day and thought back to one year before when he was sitting in the Swain County Jail.  “My recovery has given me so much.  It’s been a total transformation for sure – a rejuvenation of the soul.”

Thinking back to a year ago, he noted, “I thought that I was tough and fearless, but I wasn’t fearless.  I was scared to death.  I didn’t know how to handle life.  Through my faith in God, I’m pretty close to fearless now, and there’s nothing that isn’t possible.  I’ve been given more blessings than I can contain.”

Katelynn Ledford, McCoy’s girlfriend, accompanied him to the BADWATER race to offer her support.  “It was intense.  I saw a lot of other people that had signed up for the 51.4 mile race quit by the 32-mile point and took a medal for the 50K.”

At the 32-mile point, McCoy almost ran out of time to qualify to continue on for the 51.4 mile mark.  But, the same day as the race, EBCI Beloved Man Jerry Wolfe was laid to rest with a service and funeral and McCoy had dedicated his race that day to honor the tribal elder and hero.  There was no stopping that day for McCoy.

“Jerry was really excited about Kallup doing the Trail of Tears run,” said Ledford, “so, I thought that was a really awesome way to honor him.”

Ledford said McCoy is getting stronger each day, “At each of these races, I watch him grow.  It teaches me and helps me with the little things for me to overcome because he is doing amazing things.”

She saw his struggle during the BADWATER race, “It is a good way to make the connection with your own life.  If you really put your mind to it and you push yourself, then you can do it.  I think it’s so important to have support whether it be in recovery or another situation, having support from your community and the people that you surround yourself with is important.”

By the end of the race, McCoy said he was just exhausted.  “I was so tired I couldn’t even cry.”

His next big challenge is the Ironman 70.3 Florida event scheduled for Sunday, April 8 at Lake Eva Park in Haines City, Fla.  That race consists of a 1.2 mile swim, a 56-mile bike ride, and a 13.1 mile run.