ON THE SIDELINES: Listen to Patrick Not Star and be glad you played 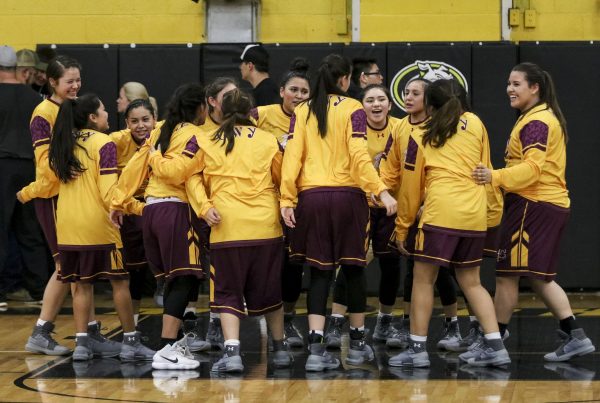 TEAM: The Cherokee Lady Braves share a moment prior to the Big Smoky Mountain Conference tournament final at Murphy last month. Moments like this embody what true teamwork and unity are all about – two great lessons learned in sports. (SCOTT MCKIE B.P./One Feather)

I’ve played all sorts of sports in my life, volleyball being my tops, and I can tell you square off I’m competitive and I don’t like losing.  I don’t think anyone does.  But, I can also tell you that the lessons learned in years of long practices, arduous training sessions, competitive games and matches, and months in the off-season of eating cleanly and hitting a volleyball every single day have taught me more about life than any game I ever won.

Cherokee is a sports town, and this year we’ve had the pleasure of seeing the Braves football team win the school’s first state title.  That was definitely cool and a wonderful achievement for the team.  But, for me, even better was getting to watch six of those young men sign letters of intent to play college football.  Lessons learned on the gridiron will help them in their college careers as they work towards their degrees.

And, even better than that was getting to watch them gel as a team and as brothers.  Teamwork – what a lesson.

This year was up and down, mostly up, for the CHS varsity basketball teams.  The Braves and Lady Braves both got off to slow starts, but the middle of the season was all theirs for the taking.  They lit it up in January!

Well, neither team finished where they wanted to, but they achieved a tremendous amount.  The Braves won the Big Smoky Mountain Conference regular season title as well as the conference tournament, and the Lady Braves were co-champions in the BSMC regular season and runner-up in the tournament.

Even if both teams had lost every single game this year, those lessons would have been learned.

Shakespeare once wrote, “Let me embrace thee, sour adversity, for wise men say it is the wisest course.”

I’ve written several times before about the importance of teamwork, but facing adversity as a team is the true test and the true lesson.

I take thousands of photos each season, but the ones I like the most aren’t the ones necessarily where a player is scoring or making a great play.  I like those, but the ones I really enjoy, both as a photographer and a sports guy, are the ones that show emotion, true emotion.  I took several this past season showing wonderful interaction between the players, and for me, that’s the true purpose of sports – interaction leading to teamwork.

My daughter has been a fan of Spongebob Squarepants since she was little, and it’s a show that we still watch, almost daily, in our house.  There’s one particular episode that rings true for this week’s column in which Spongebob and Patrick Star play a game of hide-and-seek.  Spongebob traverses the globe looking for Patrick, but he can’t find him.  Finally, Spongebob enters a small establishment at the end of the world and comes across a starfish named Patrick Not Star.  Distraught over not finding the “real” Patrick, Spongebob laments that he’ll never win the game.  Patrick Not Star simply asks, “Did you have fun playing?”

I always hope athletes, from pee wees to pros, have fun when they play.  Win or lose, it’s still a game, and it provides an opportunity for wonderful growth and lesson-learning.  Have fun!  Now, let’s get outside and enjoy some spring sports in the sunshine.