Two hundred miles and almost four hours separated the Cherokee High School varsity basketball teams in their 1A state playoff second round match-ups on the night of Thursday, Feb. 22.  The Lady Braves (18-6) advanced to the third round with a big 74-43 road win over Gray Stone Day (21-6).  The Braves (16-6) lost in a back-and-forth contest 71-60 to the Community School of Davidson Spartans in a game at the Charles George Memorial Arena. 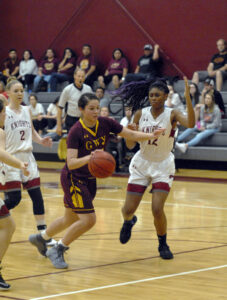 DRIVE: Cherokee’s Shelby Wolfe moves the ball between two Gray Stone Day defenders, Danielle Werts (#2) and Seccora Medley (#12), during a 1A state playoff second round game at Gray Stone Day on the night of Tuesday, Feb. 22. The Lady Braves won 74-43 to advance to the third round. (Photo courtesy of Charles Curcio, Sports Editor of The Stanly News & Press)

“It was great all around team effort,” Chris Mintz, Lady Braves head coach, said in a statement to the One Feather following the game.  “We came in focused and ready to play. We got the game at our pace and was able to wear them down. We are excited to be able to go to Mitchell Saturday. We know we have to be on the road, so we are going enjoy it .”

Deante Toineeta, Lady Braves freshman, led the way for Cherokee with 16 points.  According to Maxpreps.com, the Lady Braves scored the most points of any team against the Lady Knights since West Stanly beat them in an overtime game on Dec. 29, 2014.

The first quarter of the game was close with Cherokee leading 15-10 after the first eight minutes.  They took over in the second though outscoring the Lady Knights 25-18 to lead 40-18 at the half.  The Lady Braves outscored Gray Stone Day 19-8 in the third and went on for the big 74-43 win.

The Braves, who won both the Big Smoky Mountain Conference regular season title and the Conference tournament, ended their season on Tuesday.  “We accomplished a lot, but this was a big disappointment,” said Aaron Hogner, Braves head coach.  “That’s the way it is in playoffs.  It’s one-and-done.  We didn’t shoot very well, missed a lot of lay-ups close to the basket.  We can’t do that in games like this.”

From the field overall, Cherokee shot 33.3 percent, and they were 29.6 percent from three-point land.

He added, “Give credit to the other team.  They did a good job of protecting the middle.  It’s just a tough loss for these seniors…it was a great season for these guys to win Conference, but this was a let-down tonight.” 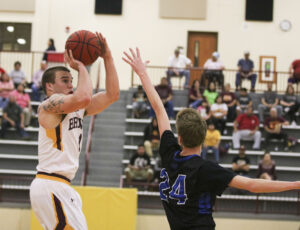 JUMP: Cherokee’s Tye Mintz shoots a three-point shot over Community School of Davidson’s Harrison Hosse during a 1A state playoffs second round game at the Charles George Memorial Arena on the night of Thursday, Feb. 22. The Braves lost 71-60 to the Spartans. Mintz led Cherokee with 16 points, 18 rebounds, 3 assists, and 1 steal. (SCOTT MCKIE B.P./One Feather)

The game was close most of the way.  Both teams started out cold in the first few minutes and the Spartans led 5-2 at the 5:39 mark of the first.  Things heated up a little after the first few jitters.  Cherokee’s Tihjah Lossiah, who ended the game with 11 points, hit a three-point shot in the last seconds of the first quarter to bring the game to within four with Davidson up 22-18.

The Braves took the lead just over a minute into the second as Josiah Lossiah hit a three-pointer to put Cherokee up 24-22.  The Braves led by as many as eight points in the second quarter.  But, the Spartans game back and outscored Cherokee 11-4 in the last three minutes to trail the Braves by a point (34-33) at the half.

Most of the third quarter was a back-and-forth affair, and the teams were deadlocked at 46-46 with just over two minutes left in the quarter.  From that point, Davidson scored the last five points of the quarter to lead 51-46 going into the fourth.

Several Braves players fouled out in the final quarter, and the Braves were unable to close the gap as the Spartans went on to take the 71-60 win.