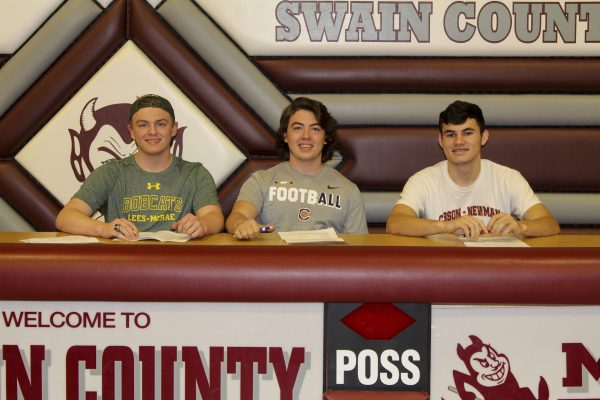 BRYSON CITY – A total of three athletes, including two EBCI tribal members, signed letters of intent to play college sports during a Signing Day event at Swain County High School on the afternoon of Wednesday, Feb. 7.  Tribal members Brodie Bowman and Seth Parker, both standouts on the Maroon Devils football team, signed to play at Carson-Newman University.  They were joined by Dewight Winchester who signed at Lees-McRae College for cycling.

“I’m just so tickled to death for these three young men that we have signing today,” said Jeff Marr, Swain coach.  “I know them all very well, and it makes me so proud, as a coach, to know that they’re going to be able to further their career and go on to college and represent the maroon and white of Swain County High School.  So, Brodie, Seth, Dewight, we’re so proud of you guys and are looking forward to big things from you guys.”

Parker, who played wide receiver for three years, finished his career with 40 receptions for 910 yards and 9 touchdowns.  “It feels great.  It feels awesome.  It’s good to continue playing football.”

To view more photos from this event, visit: https://onefeather.smugmug.com/SPORTS/Swain-County-HS-Signing-Day-2-7-18/