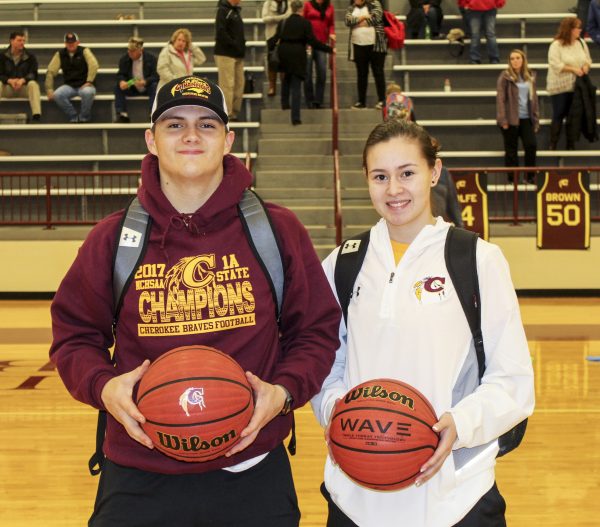 MILESTONE: Holden Straughan, Braves senior, and Tori Teesateskie, Lady Braves junior, both scored the 1,000th point of their career during games against Andrews at the Charles George Memorial Arena on the evening of Tuesday, Feb. 6. (SCOTT MCKIE B.P./One Feather)

Two Cherokee varsity basketball players hit career milestones on the same evening.  Holden Straughan, Braves senior, and Tori Teesateskie, Lady Braves junior, both scored the 1,000th point of their career during games against Andrews at the Charles George Memorial Arena on the evening of Tuesday, Feb. 6.  After hitting their milestone, the respective games were paused and each was presented with a commemorative basketball at half court.

She added, “I just want to be a role model to little kids.  I love helping with little kids.”

During halftime of the boys game, Teesateskie dedicated the basketball she was given for hitting the 1,000 point mark to the memory of the late Sam Taylor, long-time coach who passed away in September 2017.  She wrote a letter for the occasion which was read to the crowd by Shawn Crowe, Braves announcer, “Sam was a great mentor, coach, role model, and most importantly, a guiding friend.  His constant encouragement about my shooting, even on my off nights, telling me to flick my wrist, gave me the confident to be the player I am today.  Sam Taylor has always been one of the most loyal Lady Braves fans.”

On the milestone, Straughan commented, “It feels pretty good.  I know that my momma did it, and now I’ve done it.  So, it feels really good.”

Playing basketball since he was four years old, Straughan said, “I knew that if I worked hard that I would get somewhere good.  I kind of figured I would reach this goal knowing that my momma did it too.”

Holden’s mother, Pam Straughan, a member of the Cherokee basketball 1,000 point club herself, commented on her son’s achievement, “It’s awesome.  I’m very proud of him.  It makes me feel good that he played at the same high school that I did and to make that achievement.”

Both Straughan and Teesateskie were named to the All-Smoky Mountain Conference teams for the 2016-17 season.  Incidentally, both also led their teams in scoring on Tuesday night with Straughan having 30 points, including seven three-pointers, and Teesateskie having 23 points, five of which were from three-point land.

To view more photos from this event, visit: https://onefeather.smugmug.com/SPORTS/BASKETBALL/Holden-Straughan-Tori-Teesateskie-score-thousandth-point-2-6/