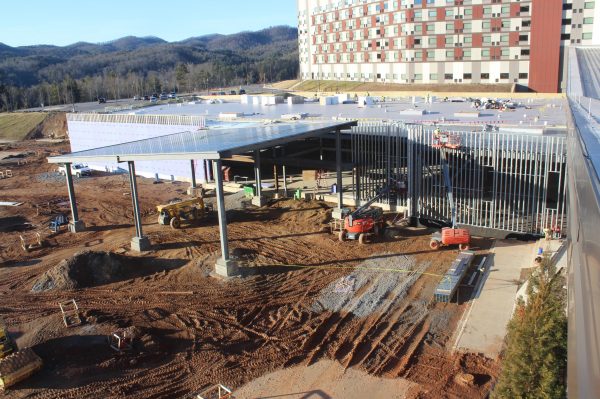 UPDATE: Despite some wintery weather, construction on the new Multi-tainment Center at Harrah’s Cherokee Valley River Casino & Hotel carried on, full steam ahead in January. (Photo courtesy of Harrah’s Cherokee)

Despite some wintery weather, construction on the new Multi-tainment Center at Harrah’s Cherokee Valley River Casino & Hotel carried on, full steam ahead in January.

Structural concrete was completed during the first two weeks of January.

Detailing work on the structural steel was also completed by the end of the month.

The completion of so many foundational trades onsite has also brought additional contractors on site. In mid-January, the roofing contractor arrived onsite and has successfully installed 70 percent of their work by Jan. 31.  Their work is scheduled for completion mid-February and will pave the way for the delivery of rooftop mechanical units.

The framing contractor also arrived. With the innovative use of prefabricated panels, they have successfully framed 90 percent of the exterior walls on the main building. The remaining 10 percent at the front entrance will be completed the first week of February.

The electrical contractor began connecting existing casino power lines to the new building. To date, they have completed 80 percent of this work.  The electrical contractor has also continued to perform underground work for exterior systems such as the Computerized Valet Parking System (CVPS) and the 24 Tesla charging stations in both the casino guest public parking and valet parking lots.

The last week of January brought in the first overhead activities with sprinkler installation. By Jan. 31, they installed approximately 25 percent of the main sprinkler lines. Upcoming, you will also start seeing the exterior walls make the transformation from exterior wall sheathing, to air barrier, and finally the early beginnings of the finishes of the exterior walls.