AROUND THE REZ: Fire Mountain Trail getting good reviews 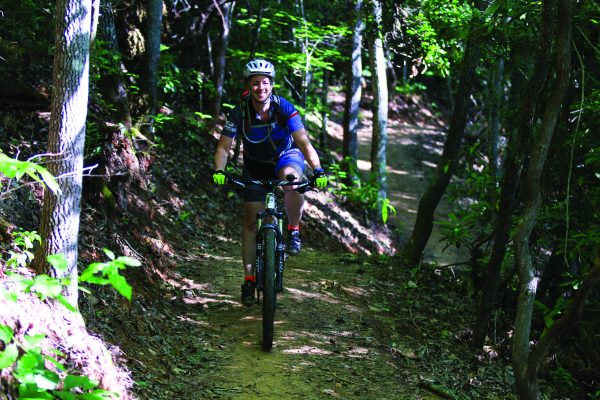 OUT FOR A RIDE: Sharon Aalfs, from Chattanooga, Tenn., took to the Fire Mountain Trail in Cherokee early on the morning of Saturday, June 10, 2017. She was joined by her friend, Jennifer Brown, also of Chattanooga, on the trail that opened the day before. (SCOTT MCKIE B.P./One Feather)

Last June, the Eastern Band of Cherokee Indians opened the Fire Mountain Trail System, a 10+ mile mountain bike trail system, and since then, the trail has been receiving flowering reviews.

At the opening on June 9, 2017, Jeremy Hyatt, EBCI Secretary of Operations and an avid cyclist, commented, “There’s been a lot of hard work and dedication to make this trail system a reality.  And, the reality is that we’ve created a premier trail system for the region, certainly for western North Carolina.”

According to the reaction from the mountain bike community, he was right.

Several weeks ago, http://singletracks.com, a website that compiles and publishes reviews of mountain bike trails, put out an article entitled “Fast, fun flow on the new Fire Mountain Trails in Cherokee, NC” written by Timm Muth.  In it, he writes, “Imagine waist-high berms carving around more than 20 switchbacks in a single run.  Imagine three of them back-to-back-to-back, like a crazy snowboard pitch.  The flow is sooo smooth, so long, in places it feels more like whitewater than biking.  Even the contour runs have a delicious flow to them, dipping down and then back up in between the tree boles, slinging you from one to the next.”

He credits the Trail Dynamics team who constructed the trail system and goes on to encourage people to check it out, “Every curve, every berm and high-side, every jump and dip, seem designed to maximize your speed, flow, and adrenaline level.  So, do yourself a favor: come to western North Carolina and ride Fire Mountain.  You deserve to have this much fun.”

That article is just one of the flowering reviews the trail has gotten.  A week after opening, the One Feather received and published a letter from Ashley Wheeler, of New Smyrna Beach, Fla., who wrote, “The trails are immaculate, well-marked, beautiful, challenging, fast, and offer a variety of opportunities to enjoy your bike and some time outside, regardless of skill level! We can’t wait to return.”

Matthew Peterson, Louisville, Ky., wrote to the One Feather in July 2017 and said, “The trails showcase your beautiful lands in a way that can be enjoyable and safe for mountain bikers of all levels.  They are world-class trails that complement the other excellent trails in the area.  This will be a very popular trail for many years to come, and would also make a fantastic race venue for future events.”

On the site http://alltrails.com, the Fire Mountain Trail System has a 4.5 out of 5 star rating and four total reviews – none of which were bad.  Michael Bussell called it a “great bike trail system” and noted “all and all, it is an awesome trail”.

The trail system itself, which is located at the top of the Oconaluftee Indian Village parking lot, is split into three main trails that are divided by difficulty level.  The green level spans 1.5 miles, is designed for beginner-level cyclists and includes two trails: Tinker’s Dream and Kate’s Weave.  The blue level spans around six miles and includes four trails designed for different levels including Waya, Lazy Elk, and Spearfinger which are for cyclists with intermediate skills and Uktena for those with advanced to expert skills.  The red level spans 2.5 miles and includes the Kessel Run for those cyclists with advanced to expert skills.