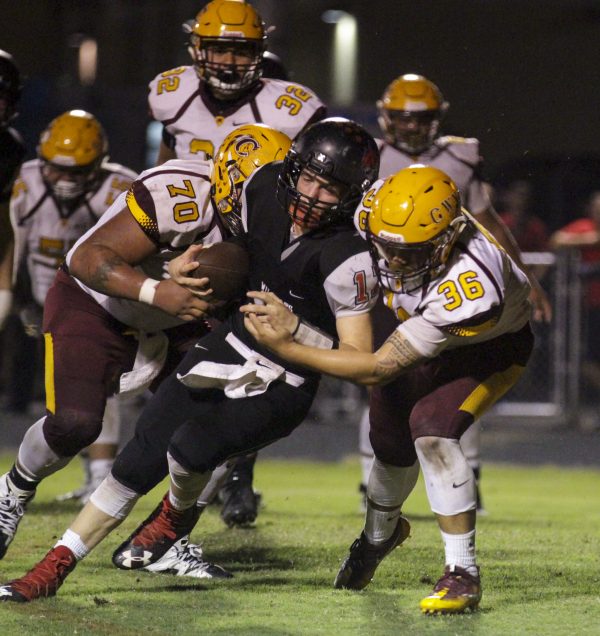 ANDREWS – Scoring was a team effort for Cherokee as they improved to 8-0 on the season with a road win at Andrews (1-8) on Friday, Oct. 13.  Four Braves scored touchdowns on the night as they held off the Wildcats 32-12.

Cherokee was led by Tye Mintz, senior quarterback, who completed 5 of 13 passes for 203 yards, two touchdowns, and one interception.  He also carried the ball five times for 58 yards and one touchdown.

Holden Straughan, senior, normally is a wide receiver on offense, but due to injuries was moved over to tailback on the night.  And, he stepped up well for the Braves carrying the ball 13 times for 62 yards and two touchdowns.

“He did a really nice job,” said Coach Briggs.  “He’s our fourth tailback, and we’ve had some really bad unfortunate luck at that position.  So, hopefully, next week we can get a little bit healthier.

SCORE: Tye Mintz (#1), Braves senior quarterback, leaps into the end zone on a touchdown run in the first half of Friday’s game at Andrews. On the night, he completed 5 of 13 passes for 203 yards, two touchdowns, and one interception. He also carried the ball five times for 58 yards and one touchdown.

Cherokee was led defensively by Byron Locust and Damian Blanton with 10.5 tackles each followed by Will Davis 6 and Jack Layno 5.5.  Locust also had 1.5 sacks and Davis had .5.

The Braves got on the board early in this game as they took the opening kickoff and drove down the field in just over a minute.  Tye Mintz got the first score of the game on an 11-yard run.  Rocky Peebles added the extra point, and Cherokee led 7-0.

Several possessions later, Tye Mintz connected with Cade Mintz on an 83-yard touchdown pass with 21 seconds left in the quarter.  Peebles added the point-after kick, and Cherokee took a 14-0 lead into the second quarter.

Tye Mintz threw his second touchdown pass of the game three minutes later as he hit Sterling Santa Maria on a 37-yard strike.  The point-after failed, and Cherokee led 20-0.

With one second left in the half, Andrews got on the board on a 1-yard run by Dillan Phillips.  The two-point conversion failed, and the Braves led 20-6 at the half.

There was no scoring in the third, partially due to turnovers by both teams. 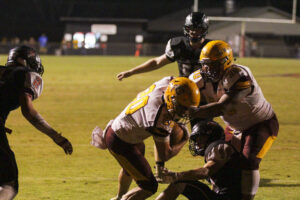 DUCKING IN: Holden Straughan, Braves senior, normally a wide receiver, took to the role of tailback in Friday’s game due to injuries and made a big impact with two touchdowns on the night including this one from seven yards out.

Straughan scored both of his touchdowns in the fourth quarter on tough runs of 6-yards and 7-yards.  Both two-point tries failed, and Cherokee led 32-6 late in the game.

With four seconds left in the game, Andrews got on the board again as Phillips threw a 40-yard touchdown pass to Matt Barton.  The two-point try failed and Cherokee won the game by a final of 32-12.

The Robbinsville Black Knights (5-2) come to town next week, a game Coach Briggs says has great importance for the Braves’ season.  “Robbinsville is a very hard-nosed football team, a very physical team.  They’ll be excited about coming here and playing us.  It’s going to be a big game for them, a big game for us.  Like every conference game, it’s like a championship game.”

To view or purchase photos from this game, visit: https://onefeather.smugmug.com/SPORTS/FOOTBALL/BRAVES-FOOTBALL-2017/At-Andrews-10-13-17/