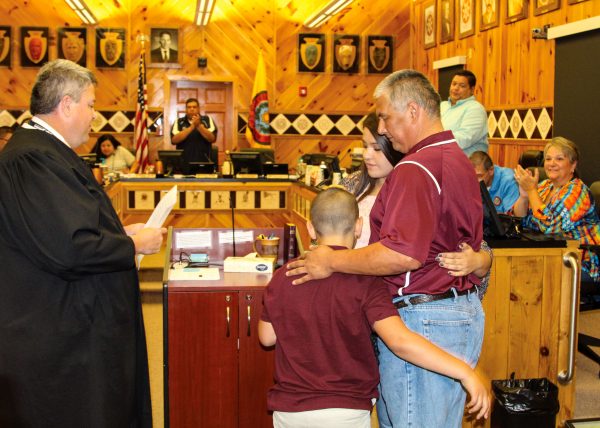 The Eastern Band of Cherokee Indians has a new Vice Chief filling an office that has sat vacant for nearly four months.  Alan “B.” Ensley, longtime Yellowhill Tribal Council representative, was selected during a vote taken near the end of Budget Council on Monday, Sept. 18.

“Council, I want to thank you for your vote of confidence,” said Vice Chief Ensley immediately following the vote.  “The incoming Council is going to have to take care of a lot of serious issues, and hopefully, they can take care and put the ordinances in place.  Hopefully, we will never have to go through what this sitting Council has went through.”

Rep. Saunooke nominated Vice Chief Ensley for the position stating he has the “most experience” of anyone in Tribal Council.  A supporter of the idea of holding a Special Election, Rep. Saunooke stated just prior to making her nomination, “We tried to put it out to the people.  That would still be my choice, but we were not able to do that with this body.  I know there were several that wanted to put it out to our people, and I’m sorry.  I’m going to apologize to Painttown for not being able to get enough votes to put it out to the people.  But, I’m ready to move on.”

Tribal Council passed Res. No. 692 (2017) on Aug. 3 calling for a Special Election.  That legislation was vetoed by Principal Chief Richard G. Sneed later that month.  Tribal Council failed to override the veto during the regular session on Thursday, Sept. 14.

Early in the discussion on Monday, Sept. 18, Chairman Taylor read a letter wherein he declined any consideration for the office of Vice Chief.  “This is a crucial time for our Tribe,” he read.  “Over the last several months, we have been in turmoil, and it is time for the turmoil to end.  We have debated issues, created issues, and we have stalled on decisions for too long.”

The letter continued, “There are some that will say I had a hand in all of this, and that I wanted the office of Vice Chief.  The actions that I have taken have been for the best interest of this Tribe, not my own personal agenda.”

Following Chairman Taylor, Rep. McCoy stated, “This is what I hear from the public – they don’t want any of us to be Vice Chief.”

Vice Chairman Jones voted against Vice Chief Ensley, but he noted afterwards that it was a vote against the process not Ensley himself.  “I know you’ve got more experience than anyone sitting around the horseshoe.  I know you will do your best to do a good job, and I’m not worried about that.  However, my decision was based on my struggle with this whole process.”

He said himself and other Tribal Council representatives have struggled with the decisions.  “We’ve heard legal opinion after legal opinion.  It’s been tough on the whole Tribe.  It’s caused some divisiveness, but it’s time to move on, and we’ve got a lot of ground to make up.”