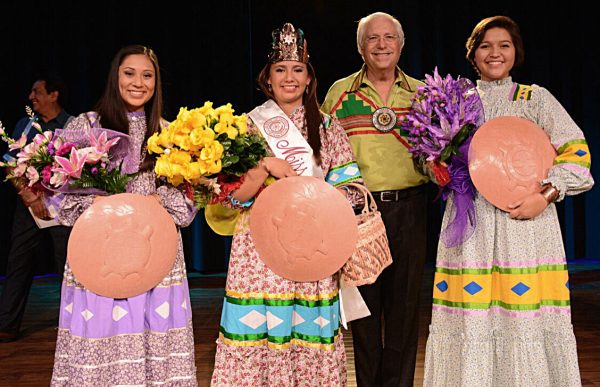 Whitekiller was crowned Saturday during a leadership competition at Cornerstone Fellowship Church in Tahlequah.

As Miss Cherokee, Whitekiller will represent the Cherokee Nation as a goodwill ambassador to promote the government, history, language and culture of the tribe for the next year. She also receives a $3,000 scholarship.

“It’s important Cherokee Nation recognizes our young role models, like new Miss Cherokee Madison Whitekiller. Miss Cherokee traditionally reflects the best qualities of Cherokee youth, and Madison is no different,” Principal Chief Bill John Baker said. “As she travels across Oklahoma and the United States in the coming year, Madison will be a messenger of the Cherokee people as she educates people of all ages and from all walks of life.”

Whitekiller is the daughter of Suzy Whitekiller. She competed against six other young women for the Miss Cherokee crown.

The Miss Cherokee Leadership Competition judges contestants on their use of the Cherokee language, cultural and platform presentations, and responses to impromptu questions.

“So much preparation went into this, and when they called my name, it was just instant shock and tears came to my eyes,” Whitekiller said. “It’s really just such a testament that hard work really does pay off, and I feel so completely blessed to be where I am right now.”

For her cultural presentation during the Miss Cherokee Leadership Competition, Whitekiller told the traditional Cherokee story of why the cornhusk doll has no face. Her platform focused on empowering Cherokee women.

“My inspiration behind my platform was my mom and her battle with cancer, and how I helped her along with that. She called me her ‘little nurse,’ and that’s what made me pursue a medical career,” Whitekiller said. “I’ve always been surrounded by really strong Native women with my mom, my grandma and my whole family. In the media and other places, I noticed our Cherokee women aren’t being honored like they used to be, so I thought this would be a great way to remind people of the importance of our women.”