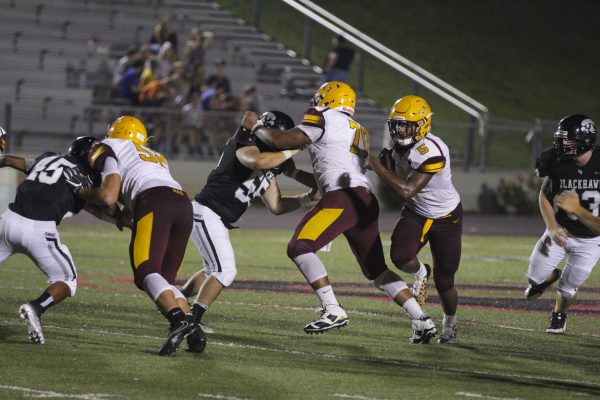 GOOD BLOCKING: Cherokee’s Seth Smith (52) and Byron Locust (70) seal off a huge hole for Isaiah Evans to run through in a season-opening game at North Buncombe on Friday, Aug. 18. On the night, Evans ran 12 times for 144 yards and two touchdowns. (SCOTT MCKIE B.P./One Feather photos)

“It was a good opening night,” Kent Briggs, Braves head coach, said following the game.  “In every first game, you’re going to have some mistakes.  But, what I liked about what our guys did was they played really hard and they stayed confident.  They stayed focused on the game.  They didn’t let things that happen during football games distract them.”

He added, “I was really happy with the way we finished.  We have a lot of guys who played a lot of snaps which we’ll have to do all year.  It was a good, warm night, and our guys hung in there.  I’m really proud of the effort and the way we played as a team.” 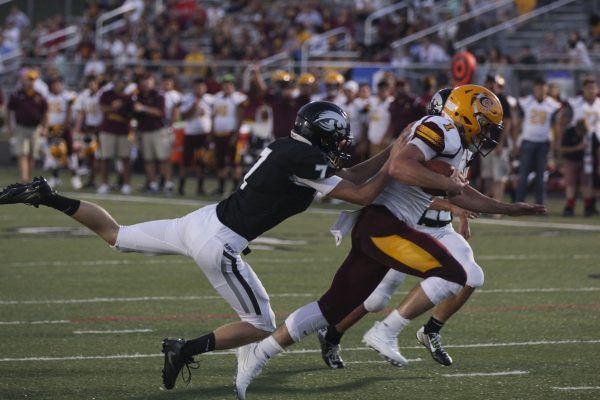 TOUGH RUNNING: Tye Mintz, Braves senior quarterback, runs hard near the end zone en route to a score in the first half. On the night, he ran 12 times for 142 yards and two touchdowns and completed 6 of 8 passes for 96 yards and 1 touchdown.

Cherokee played stiff defense all night and held the Black Hawks to a field goal until the fourth quarter.  Mintz led with eight tackles on the night followed by Darius Blanton 6.5, Blake Smith 4.5, and Joaquin Layno and Byron Locust with 4 each.  Sterling Santa Maria had an interception on the fourth play of the game, and Mintz recovered a fumble in the second quarter.

Cherokee jumped out early in the game.  Following the interception by Santa Maria, the Braves drove down and Mintz ran a quarterback sneak from the 1-yard line for Cherokee’s first score.  Mintz ran for the two-point conversion, and Cherokee led 8-0 at the 10:41 mark of the first.

Following a missed field goal by North Buncombe – a 48-yard attempt that had the distance but went wide right – Cherokee was back in the end zone two plays later as Mintz connected with Santa Maria on a 48-yard touchdown pass down the right sideline.  The two connected on another pass for the two-point play, and the Braves took a 16-0 lead with three minutes left in the first. 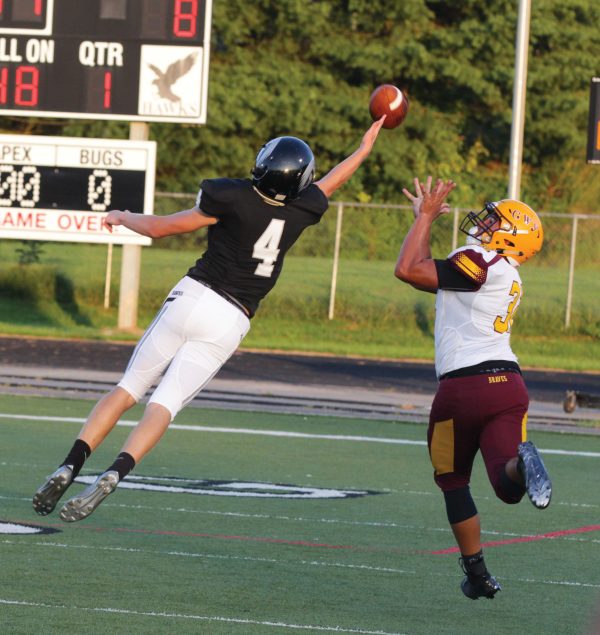 CONCENTRATION: Cherokee’s Sterling Santa Maria (32) prepares to catch a touchdown pass over the out-stretched arms of North Buncombe’s #4 (roster unavailable) during the first quarter of Friday’s game in Weaverville.

Several possessions and punts by each team later, Cherokee started a drive midway through the second quarter at their own 37-yard line.  Several plays later, Mintz ran 21 yards for his second rushing touchdown of the night with just under four minutes left in the half.  The point-after play was no good and Cherokee would take a 22-0 lead into the half.

North Buncombe got on the board as Johnny Laws hit a 26-yard field goal to make it 22-3 midway through the third.

Blake Smith had a nice return on the ensuing kickoff for the Braves, and Cherokee started in good field position at the Black Hawks 47-yard line.  Two plays later, Evans outran the North Buncombe defense en route to a 35-yard touchdown run.  Mintz ran for the two-point conversion and Cherokee extended its lead to 30-3.

Early in the fourth, the Black Hawks would get into the end zone as #10 threw a 12-yard touchdown pass to #12.  Laws added the PAT, and Cherokee led 30-10.  (Note: The roster available for North Buncombe listed only eight players.)

Two minutes later, Evans was back in the end zone – this time on a 6-yard run.  The two-point pass play was no good, and Cherokee led 36-10 which is how the game would end.

The Braves are on the road next as they travel to Choctaw Central (Miss.) for the annual “Battle of the Nations” game on Friday, Aug. 25.