The town of Cherokee is fortunate to be in the viewing path as the frog swallows the sun (i.e. a total solar eclipse) on the afternoon of Monday, Aug. 21.  This rare event is drawing thousands upon thousands of spectators to the areas in western North Carolina that are in the path of the eclipse.

“The Eastern Band of Cherokee is expecting huge numbers of visitors for the eclipse on Aug. 21 and we are excited,” said Principal Chief Richard G. Sneed.  “We have long welcomed visitors and we expect this event will surpass our expectations. All the businesses in Cherokee have been preparing, and we hope the event will help us show our visitors the great experiences they can have here so they plan their next vacation in Cherokee!”

Cherokee is hosting a Cultural Eclipse Celebration at the Cherokee Indian Fairgrounds on Aug. 20-21.  The event will feature performances, storytelling, food vendors, and more.  The cost is $25/per day for ages 6 years and older with 5 and under free.  Certified eclipse-viewing glasses, for safety, are available for all.  Special eclipse t-shirts, mugs, hats, etc. will also be for sale at the event.  For more information on that event, visit: http://visitcherokeenc.com/events/detail/cherokee-cultural-eclipse-celebration/. 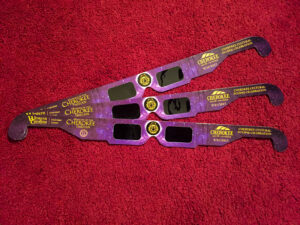 SAFETY: Eclipse viewing safety glasses, as shown in the photo, will be available at a Solar Eclipse event at the Cherokee Indian Fairgrounds on Monday, Aug. 21. The town of Cherokee is fortunate to be in the viewing path as the frog swallows the sun (i.e. a total solar eclipse) on that afternoon. (One Feather photo)

A total of 500 tickets were sold online for the event shortly after they went on sale, and another 1,000 have been added.

Viewing of the total solar eclipse, known as totality, will only be available in portions of 12 states from North Carolina to Oregon.

According to GreatAmericanEclipse.com, “Since the portion of North Carolina within totality is small, the moon’s shadow will pass quickly.  The total solar eclipse first touches North Carolina at 2:33pm EDT and exits at 2:49pm EDT.”

Robert Panther, EBCI Emergency Management coordinator, stated, “There will be no traffic changes in the Cherokee area; however, NCDOT will make some adjustments to some area traffic lights to accommodate the increase in traffic.”

The North Carolina Department of Transportation (NCDOT) stated, “Large numbers of people are expected to make their way toward the path of the total eclipse in North Carolina and points south.  There could be significant impacts from congestion before and after the event.  Safe driving behavior before, during and after the eclipse is important.  The N.C. Department of Transportation encourages travelers to arrive early, stay put, and leave late.”

NCDOT officials noted the agency will “suspend most construction projects and lane closures” during the weekend of the eclipse.

The Great Smoky Mountains National Park, the country’s most visited National Park, will be busy.  The Park is hosting a viewing event at Clingmans Dome which sold out (1,325 passes) in five minutes according to Jamie Sanders, Park spokeswoman.  “We plan to have 125 local students and over 800 presenters also attending the event.  When you add in staff, we should have approximately 1,600 individuals in attendance.”

Due to the event, Clingmans Dome Road will be closed from Saturday, Aug. 19 through the evening of Monday, Aug. 21 following the event.  Sanders related, “No overnight parking will be allowed at Clingmans Dome Parking Area or pull-offs, parking areas, and trailheads along the road during this time period.  The road will be closed to all motorists, pedestrians, and bicyclists.”

Panther related that parking areas at the Cherokee Fun Park and adjacent Cherokee Visitors Center will be used to overflow parking for the Park’s event.

Backcountry explorers and campers are encouraged to still enjoy the Park during this time.  “During the closure, all trails, campsites, and shelters in the backcountry will remain open, but backpackers should carefully consider the road closure when planning their itineraries,” said Sanders who related that an interactive map is available (http://go.nps.gov/GRSM_ECLIPSE ) to view which backcountry campsites are in the path of totality.

Sanders added, “Clingmans Dome Road is the only Park road closed for the solar eclipse event, but Park visitors should be prepared for high volume traffic across all Park roads on Monday, Aug. 21.  Vehicles cannot stop in the roadway and must be parked in designated parking areas.  If roads become congested or cause a safety concern, rangers may temporarily close them to additional inbound traffic until after the eclipse to reduce traffic congestion and allow access for emergency response.  Visitors should expect temporary road closures throughout the day.”

The rarity of the event is one reason for the high amounts of expected traffic.  The Cherokee Chamber of Commerce related that all of the member-hotels are booked solid for the weekend leading up to the eclipse.