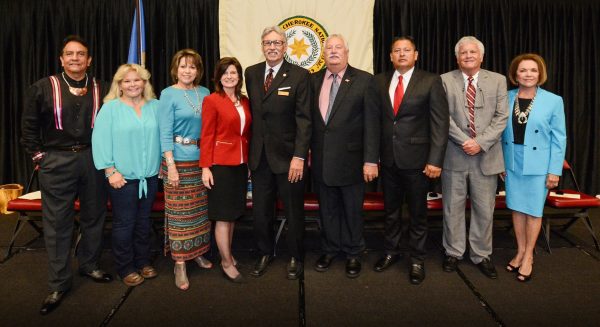 TAHLEQUAH, Okla. – Nine Cherokee Nation Tribal Councilors were sworn into office Monday as they pledged to preserve, protect and defend the Cherokee Nation Constitution during their four-year terms.

New and re-elected Tribal Councilors vowed to promote the culture, heritage and traditions of the Cherokee Nation as they stood before hundreds of people in the Sequoyah High School gymnasium to be sworn into office by Supreme Court Chief Justice John Garrett.

“First off, I am humbled by the confidence of my district’s citizens and will serve them to the best of my ability,” Tribal Council Speaker Joe Byrd said. “Additionally, I look forward to working with the councilors who were re-elected, as I believe we charted a successful course for progress during our first term. We are also very fortunate to welcome four new councilors, and I know they will bring fresh ideas with them to share with the group.”

More than 6,000 Cherokee Nation citizens voted in the June 3 Tribal Council election, and more than 1,400 in the July run-off election.

“The Cherokee Nation has made great strides in the past several years in health care, job development, housing and more,” said Hargis, of Stilwell. “With our councilors returning to office, those joining our legislative branch for the first time and those currently in office, our branch of government will work with the administration and build upon the solid foundation that has been laid.”

The tribe’s legislative branch consists of a 17-member Tribal Council representing the 15 districts inside Cherokee Nation’s jurisdiction and two at-large seats representing citizens who live outside the boundaries. Members are elected by popular vote to four-year terms.