Blue skies and a steady breeze welcomed Cherokee into the realm of eco-tourism as the Fire Mountain Trail System opened on Friday, June 9.  The 10.5 mile trail system, which features mountain bike trails for three different skill levels that are also open to runners and hikers, is located at the top of the Oconaluftee Indian Village parking lot.

“There’s been a lot of hard work and dedication to make this trail system a reality,” said Jeremy Hyatt, EBCI Secretary of Administration and avid cyclist.  “And, the reality that we’ve created is a premier trail system for the region, certainly for western North Carolina.”

He said the project is now open, but it’s not finished.  “We’re hoping to create more trailheads.”

Hyatt said he has received calls from all over the country inquiring about the trail system.  “We really appreciate the community’s support.  We don’t want to stop here.  We want to identify other properties…we have an opportunity, here in Cherokee, to create an eco-tourism mecca, and I think that we can really truly do that.” 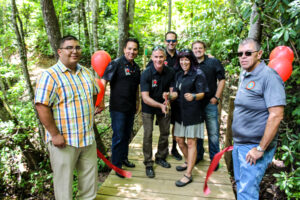 Though, he noted the most important part of the project is “the opportunity for us and our neighbors to get out and enjoy the fresh air and splendor of what we all call home.”

Principal Chief Richard G. Sneed, an avid cyclist who rode on the 2014 Remember the Removal ride, commented, “This is really the jumping off point for Cherokee and our move into eco-tourism.  As Jeremy stated, this is really a premier trail system.”

He went on to thank Ed Sutton, whose Trail Dynamic company constructed the trail, as well as Tinker Jenks, an EBCI tribal member who currently works at the Cherokee Preservation Foundation but was instrumental in starting the project while she worked previously with the former EBCI Economic & Community Development Office.  “There have been a lot of people who have done a lot of work behind the scenes.  Oftentimes, in leadership, we get to come to events like this, and we cut the ribbon and we get our picture taken and the credit seems to go to those in the front.  But, in reality, it is all of those folks who have been working behind the scenes, working diligently, to see this project come to its fruition.”

Hyatt also acknowledged Jenks’ work on the project referring to her as “the idea maker” and noting, “She is the one who started the process in terms of getting grant funding for the trail, and this probably wouldn’t have started without her.” 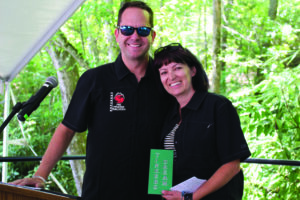 DREAM: Jeremy Hyatt (left), EBCI Secretary of Administration, presents a plaque designating a trail as “Tinker’s Dream” to Tinker Jenks, who played an instrumental role in the development of the Fire Mountain Trail System.

Jenks spoke briefly and stated, “The idea of having the trail system started years and years ago.”

She said some of the ideas started with the Junaluska Leadership Council and the Cherokee Youth Council.  “They just all talked about how they really wanted a trail system that was close to town, that was safe, and that a lot of different users could use.  So, when I became a tribal planner, this was one of the first things that I took up.  It was my baby project.”

Tribal Council passed Res. No. 170 (2014), which was submitted by the Junaluska Leadership Council, in April 2014.  The resolution stated, “…there is a need to diversify the local economy through greater promotion of Eco Tourism and developing mountain bike/hiking trails throughout the Qualla Boundary stimulating economic growth and providing healthy recreational activities for enrolled members.”  It went on to authorize the planning and development of the trails.

Jenks said there were several setbacks in the development of the trail system, including a fire on Mt. Noble, but she said perseverance was the name of the game.  “When you hear a great idea for the community, don’t give up.  Jump over those roadblocks that come at you.  Just keep going because persistence pays off.”

Sutton thanked the Tribe for their support on the project and said working on the project was an honor for himself, his wife, and his crew.  “We always dream, as trail builders, to have a project where you can work in a beautiful place like this and have a canvas that’s as gorgeous as this mountain to work with.  This was our home for six months.  We were here every day.  We saw the fall, all the fires in the winter, we saw the azaleas bloom in the spring.”

He told the crowd of an amazing, emotional experience he had on the trail.  “The blossoms from the laurel were starting to fall, and it was like snow and they were on the trail.  And, I thought it couldn’t be more beautiful than this.  It was amazing.  It touched me.” 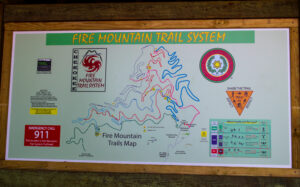 LEVELS: A sign at the start of the trail designates the various trails on the system.

The trails were designed by Aniwaya Design & Planning, and Zeke Cooper, Aniwaya principal and landscape architect, spoke on the project, “This project would not have happened without Tinker and Damon Lambert…everybody here needs to tell her thank you and remember her when you’re on this trail.”

He added, “To really see a project come from nothing to this point is really exciting.”

The trail system itself is split into three main trails that are divided by difficulty level.  The green level spans 1.5 miles, is designed for beginner-level cyclists and includes two trails: Tinker’s Dream and Kate’s Weave.  The blue level spans six miles and includes four trails designed for different levels including Waya, Lazy Elk, and Spearfinger which are for cyclists with intermediate skills and Uktena for those with advanced to expert skills.  The red level spans 2.5 miles and includes the Kessel Run for those cyclists with advanced to expert skills.