Scarlett Guy, a junior at Cherokee High School, has been selected to attend the Governor’s School of North Carolina which is a five and one-half week summer residential program for intellectually gifted high school students. It is the oldest statewide summer residential program for academically or intellectually gifted high school students in the nation.

The Governor’s School summer program is open to rising seniors and integrates academic disciplines, the arts, and unique courses.

In addition to being identified as academically or intellectually gifted, Governor’s School candidates must have scored in the 92nd percentile or higher on approved achievement tests or state end-of-course (EOC) exams in core content areas. Guy became eligible for Cherokee High School’s Talented and Gifted (TaG) program during her sophomore year and has been involved in the TaG program for the past two school years.  Her qualifying EOC score was in biology. She completed honors biology at Cherokee High School her sophomore year. 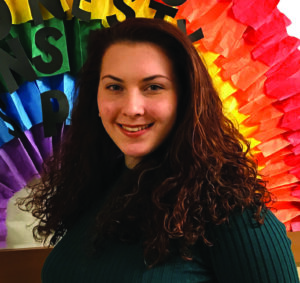 Scarlett Guy, a junior at Cherokee High School, has been selected to attend the Governor’s School of North Carolina which is a five and one-half week summer residential program for intellectually gifted high school students. (Cherokee Central Schools photo)

Governor’s School applicants must also submit two essays for evaluation and review. In her natural science essay Brain-Machine Interfaces Use on Paraplegia, Guy explored the emerging experimental use of brain-machine interfaces (BMI) and robotic limbs to allow paraplegics to control prosthetics mentally.

She said, “I was fascinated by Dr. Miguel Nicoleis’s work with Duke University’s Walk Again Project and wanted to explore the idea even further.”

In her second essay, Guy explored the topic of tracking in schools, segregating groups of students according to academic achievement. She researched and compared tracking practices in Finland, South Korea and the United States.

“Scarlett is an ideal student who is eager to learn and who goes above and beyond standard classroom learning expectations to gain new knowledge about topics of special interest to her. I am very proud of Scarlett and her commitment to the Governor’s School application process,” said Cherokee Central School TaG teacher Dr. Beverly VanHook. “Governor’s School will be a wonderful new world of learning for Scarlett to explore with talented and gifted peers from across the state.”

The statewide selection rate for Governor’s School is approximately 38 percent. Out of almost 1,800 nominations from across the state, only 670 students were selected to attend North Carolina Governor’s School 2017.