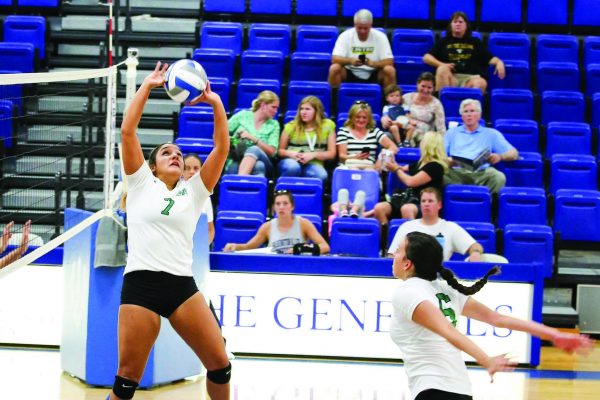 SET IT UP: Valerie Baety, a junior at Southern Virginia University and an EBCI first descendant, sets a ball during a match this season. (Photo by Carmen Arkansas Nations)

Valerie Baety, a junior at Southern Virginia University, can set a volleyball.  And, she can set it well.  She recently set a college career milestone by getting her 1,500th assist (an assist is when a player passes or sets the ball that results in a kill).

“When I hit the milestone, all I could think of was how long I’ve been playing, my family cheering me on and all the teammates I’ve had in the past,” said Baety, an EBCI first descendant from the Yellowhill Community.  “It was pretty emotional and really exciting to hit it, but the game still had to go on.”

She set the mark during a game against Roanoke on Tuesday, Oct. 25 in which she had 21 in that game alone.  Averaging 7.1 assists per set, Baety currently has 1,544 for her career.

Baety has been at the game for awhile.  “I’ve been playing since I was really young with my aunt (Kimberly Arkansas) and her Arkansas Volleyball Camps, and it’s been a love of mine ever since then.”

She was a starter on the Swain County Lady Maroon Devils varsity team for four years receiving All-Conference honors in 2011, 2012, and 2013.  She was the varsity team captain and was named Swain Co. High School Volleyball Player of the Year in both 2012 and 2013, and she was named Swain Co. High School Female Athlete of the Year and All-WNC Honorable Mention in 2013.

“I’ve been a setter ever since I can remember,” recalls Baety.  “I’ve never played any other position, and I wouldn’t have it any other way.  I love the fact that I know I am capable of putting my hitters in the best position possible to put the ball away and that they trust my decisions no matter what.”

She would like to continue to pursue volleyball once her career at Southern Virginia ends whether that involves coaching or player at an even higher level.  “The atmosphere and the love girls share for the game is what I play for.”

Reflecting on her recent milestone, Baety related, “The best part was knowing how many people were supporting me and cheering me on to reach this achievement.  Without my family, coaches, and teammates, this wouldn’t have been possible.  Most of all, I’m just grateful for the opportunity I have had to play the sport I love for so many years.”