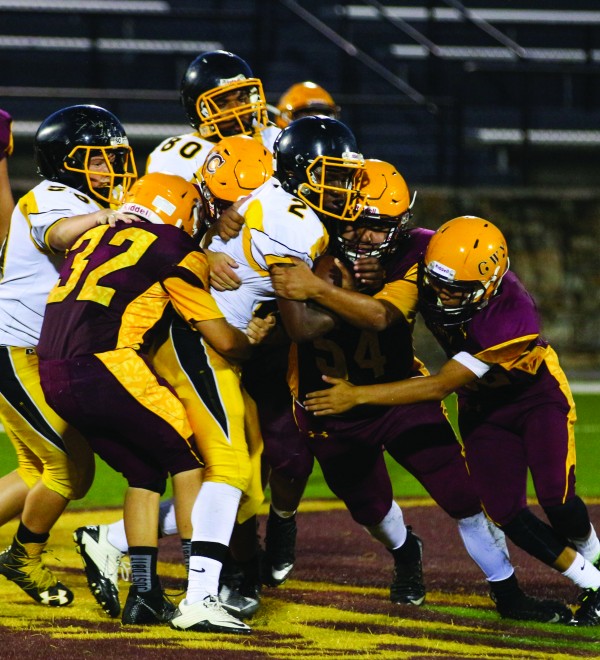 GROUP TACKLE: A host of Braves, led by Derrick Thomas (#54) and Ayden Evans (#32) tackle Murphy’s Devonte Murray during a game at Cherokee on Thursday, Sept. 22. Thomas led Cherokee with 12 tackles on the night. He was followed by Evans and Caden Pheasant with 8 each. (SCOTT MCKIE B.P./One Feather photos)

The Cherokee JV Braves (1-3) fell to the Murphy JV Bulldogs by a score of 50-28 during Homecoming Night at Ray Kinsland Stadium on Thursday, Sept. 22.  On paper, the game was very close with both teams having two turnovers (1 interception and 1 fumble) each.  Cherokee had 20 first downs in the game and Murphy had 21.

In all, there were 11 touchdowns scored between the two teams.  Bobby Crowe, JV Braves quarterback, threw three touchdown passes including two to Jaden Welch (9 and 59 yards) and a bomb to Sterling Santa Maria for 81 yards.  Justice Dorsey scored three rushing touchdowns for the Bulldogs on runs of 34, 82, and 57 yards.

The Braves were led defensively by Derrick Thomas with 12 tackles followed by Caden Pheasant  and Ayden Evans with 8 each.  Pheasant also nabbed an interception.

The game started off about as badly as it could get for the Braves.  On the first play from scrimmage, an errant snap sailed through the back of the end zone, and Cherokee gave up a safety.

Due to the safety, the Braves had to kick off to the Bulldogs who took over at the Cherokee 45-yard line.  Four plays later, Dorsey scored his first of the night on a 34-yard run.  Devonte Murray ran for the two-point conversion and Murphy led 10-0 just two minutes into the game.

The Braves weren’t rattled though.  After starting at their own 27-yard line, they put together a 17-play drive that took seven minutes off the clock and culminated in a 9-yard touchdown pass from Crowe to Welch on a 4th and goal.  The two-point try failed and Murphy led 10-6 with 52.7 left in the first.

Murphy started their next drive at their own 44-yard line.  Ten plays later, Murray ran 15 yards for a score.  Their two-point try failed, and the Bulldogs led 16-6 with 5:38 left in the half. 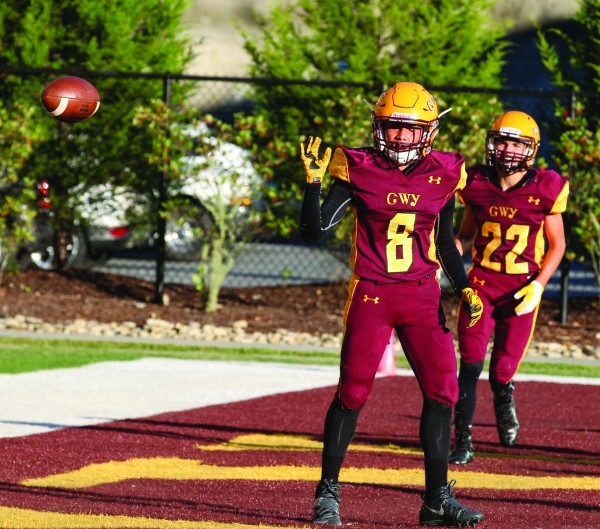 HERE YA GO: Jaden Welch, JV Braves wide receiver, tosses the ball to the referee after scoring on a 9-yard pass from Bobby Crowe in the first quarter. The two would later connect on a 59-yard touchdown pass.

Cherokee set up shop for their third possession of the game at their own 25-yard line.  On second down though, Murphy’s Leland Larson intercepted the ball at the Cherokee 44.

But, that was short-lived. Three plays later, Pheasant returned the favor and intercepted the ball at the Cherokee 47-yard line.  The Braves were unable to move the ball though and were forced to punt.

Murphy took over deep in their own territory at the 7-yard line following the punt.  Six plays later, Dorsey took off on an 82-yard touchdown run.  The two-point try failed and Murphy led 22-6 – a lead they would take into the locker room.

The Bulldogs scored two quick touchdowns in the third quarter.  First, Dorsey ran 57 yards for a score.  Then, the Bulldogs recovered a Cherokee fumble on the ensuing kickoff.  Ray Rathbone scored three plays later on a 4-yard touchdown run to make it 36-6 with 7:55 left in the third.

Cherokee turned the ball over on downs on their next possession, and Murphy took over at their own 43.  Four plays later, Rathbone caught an 8-yard touchdown pass.  Michael Crowder ran for the two-point conversion to make it 44-6 with just under three minutes left in the third.

The Braves came back though and scored two touchdowns in the next six minutes.  A.J. Allison scored on a 2-yard run on Cherokee’s next drive which went 10 plays for 65 yards.  Crowe ran in for the two-point conversion to make it 44-14.  Following a Murphy punt, Cherokee took over at their own 19 and two plays later, Crowe connected with Santa Maria on an 81-yard touchdown pass.  Allison ran for the two-point play, and the Braves trailed 44-22 with 7:46 left in the game.

To view or purchase photos from this game, visit: https://onefeather.smugmug.com/SPORTS/FOOTBALL/JV-BRAVES-FOOTBALL-2016/Vs-Murphy-September-22/

(Note: Official statistics are not taken for JV football games.  All stats provided here are taken by One Feather staff at the game.)