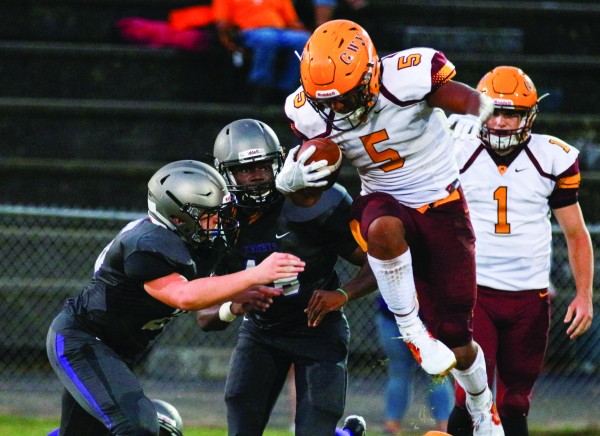 KINGSPORT, Tenn. – Cherokee fans got to see a rainbow, a beautiful sunset, and a season-opening win on Friday, Aug. 19 as the maroon and gold traveled to Tennessee.  The Braves (1-0) defeated the Trinity Academy Knights (0-1) by a score of 50-32 in a game held at Don “Log” Martin Field in Kingsport, Tenn.

He added, “First games have a lot of mistakes that we made that we can correct, but what I liked was that even though we made the mistakes, we didn’t let it stop us.  There were a lot of people that were banged up and had to go while banged up and guys go in that had never played certain positions because we’re low on numbers.  So, we just had to adapt on the run.  It was kind of ugly sometimes and kind of scrambling at times, but it’s what we’re going to have to do when we have low numbers.”

The Braves were led offensively by Isaiah Evans, sophomore running back, who carried the ball 26 times for 159 yards and 2 touchdowns.  Tye Mintz, junior quarterback, completed 13 of 20 passes for 146 yards, one touchdown, and one interception.  On the night, Mintz spread the ball around well completing passes to four receivers including: Shane Swimmer 5-45, Anthony Toineeta 2-32, Cade Mintz 4-37, and Evans 3-32. 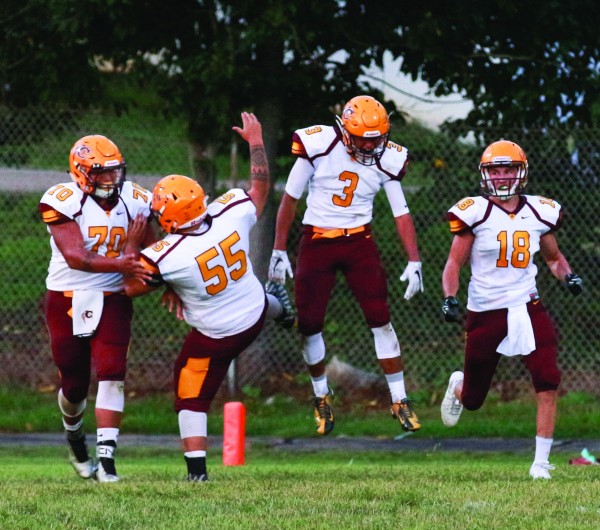 Trinity got the ball first in the game and started from their own 29-yard line.  Cherokee’s defense held the Knights to a three-and-out, and Trinity was forced to punt.  During the punt return, the ball bounced up and hit the leg of a Braves player.  Trinity pounced on it and took over at the Cherokee 39-yard line.

Cherokee’s defense held again and the Knights were forced to punt giving the Braves the ball at their own 23-yard line.  After a three-and-out, the Braves punted.  Trinity’s David Aurther fielded the ball at the Knights 40-yard line and 60 yards later was in the end zone for the first score of the game.  The extra point was no good and Trinity led 6-0 at the 5:47 mark of the first quarter.

Cherokee got the ball back and started a drive at their own 30-yard line that would take up most of the remainder of the first.  The 12-play drive culminated in a 9-yard touchdown pass from Tye Mintz to Toineeta.  The two-point conversion failed, and the game was tied at 6-6- with 42.5 seconds left in the first.

Following the kickoff, Trinity started from their own 45-yard line.  On the first play from scrimmage, the Knights fumbled the ball which was picked up by Swimmer who ran it back 55 yards down the left sideline for the score.  The two-point try failed again, and Cherokee led 12-6 with 17.2 seconds left in the first.

Trinity punted on their next possession and Cherokee turned the ball over on downs at their own 42-yard line early in the second quarter.  After taking possession, the Knights wasted no time.  On first down, Aurther ran 32 yards to the 10.  The next play, Grayson Vaughn, Trinity junior quarterback, kept the ball himself and ran for the score.  The point-after kick was good and the Knights took a 13-12 lead with 7:56 left before the half.

Cherokee answered quickly though.  After starting in good field position at their own 43-yard line, the Braves put together a six play drive that culminated in a 19-yard touchdown run by Tye Mintz.  Swimmer made the two-point conversion and Cherokee retook the lead at 20-13 with 6:11 left in the second.

Following a Trinity punt, the Braves set up shop at their own 37-yard line with just over five minutes left in the second.  Eight plays later, Evans ran up the gut of the Knights defense for a 3-yard score.  He then ran for the two-point conversion to make it 28-13 with 2:21 left before the half. 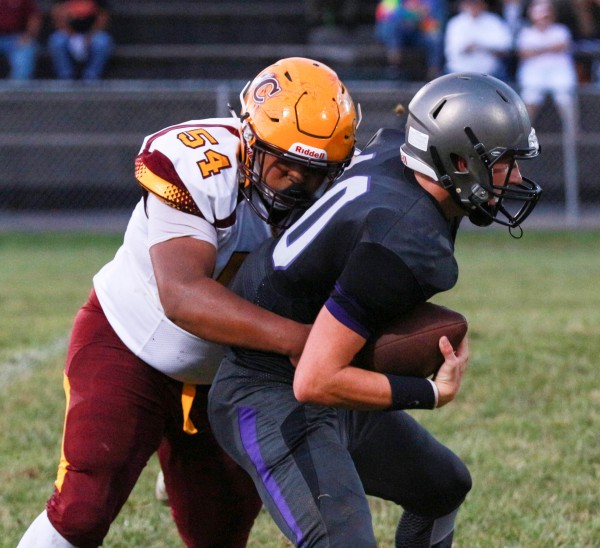 The Knights wouldn’t quit though and managed to get another score on the board before the half as Aurther scored on a 6-yard touchdown pass from Vaughn with 32 seconds left.  The two-point try failed, and the Braves took a 28-19 lead into the locker room.

Cherokee came out firing in the third quarter.  After starting on their own 23-yard line, the Braves put together a nice 13-play drive that took almost half of the quarter.  Evans finished the drive with a 10-yard touchdown run, his second of the game, at the 6:02 mark.  The two-point try failed and Cherokee led 34-19.

Two drives later, the Braves were back in the end zone as Swimmer ran 14 yards for the score that finished an 11-play drive.  The two-point conversion was good and Cherokee took a commanding 42-19 lead at the 10:21 mark of the fourth quarter.

Each team would score once in the fourth.  Toineeta scored on a 32-yard run at the 5:31 mark and Trinity’s Raequan Jordan caught a 44-yard touchdown pass from Vaughn 21 seconds later to make the final score 50-32.

Full statistics were unavailable for this game by press time.

Cherokee has their first home game of the season as they host the Mitchell Mountaineers (1-0) at Ray Kinsland Stadium on Friday, Aug. 26 at 7:30pm.

To view or purchase photos from this game, visit: https://onefeather.smugmug.com/SPORTS/FOOTBALL/BRAVES-FOOTBALL-2016/At-Trinity-Academy-Tenn-August/