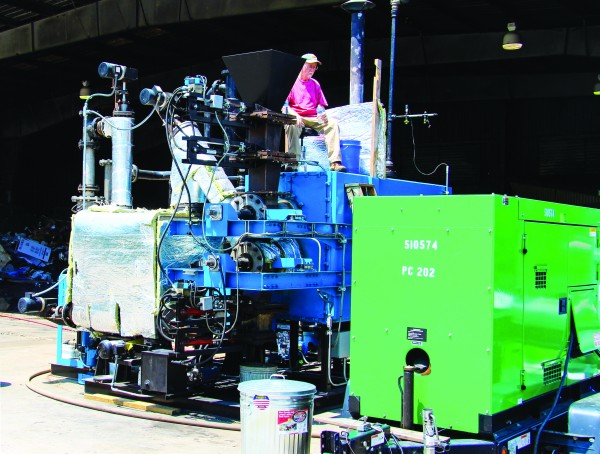 The Eastern Band of Cherokee Indians is currently looking into a waste-to-energy process known as pyrolysis at the Tribal Transfer Station. (SCOTT MCKIE B.P./One Feather photos)

A machine currently located at the Tribal Transfer Station off of Olivet Church Road looks like something out of “Charlie and the Chocolate Factory”, but it is the future of waste disposal and energy production according to the Tribe’s energy program coordinator.

The machine is running a two-week demonstration of pyrolysis (thermal distillation) which converts recycled bottles, old tires and other waste into a synthesis gas known as Pyrogas.  “This process has been around since World War II,” said Cameron Cooper, who garnered three grants from the Department of Energy and Mineral Development for the Eastern Band of Cherokee Indians totaling over $750,000 to study this process.

“Feed stock comes from recycled bottles donated from Tribal Recycling and recycled tires,” related Cooper who said the system uses its own gas to power the burner.  “Nowhere in this process does an open flame ever touch any of the feed stock.” 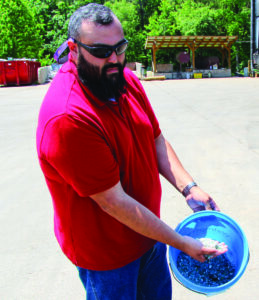 Cameron Cooper, EBCI energy program coordinator, shows plastic bottle bits that are about to put into the pyrolysis unit.

The feed stock spends about an hour in the machine.  “As it breaks down, it basically turns back into carbon,” said Cooper.  “So, you’ve got a carbon residual that comes out.  It’s just like a distillation unit.  It gets cleaner and cleaner as it goes along.  From the end, it turns into natural gas.”

He said the carbon could be sent to the Tribal Compost program.

Cooper said the machine itself is quite efficient.  “The way the system works is that there is a burner on it, but that burner doesn’t stay on 100 percent of the time.  Once that oven gets up to temperature, as that plastic or whatever that feed stock that is in there breaks down, it creates its own heat so it’s kind of like an air conditioning system.  Once it gets up to temperature, it cuts off and it’ll be off for awhile.  It’s efficient in its own self.”

The machine that is being used for the two-week demonstration came from American Renewable Technologies Inc. based in Los Angeles. 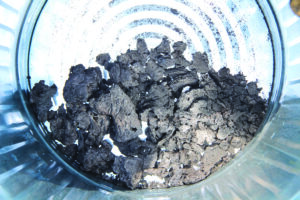 Cooper said the grants for the project came in three stages.  “The first grant was a waste characterization study which looked at what our waste stream was here in Cherokee.  It also looked at our tipping fees, our hauling bill, and it also looked at other parts around us.  Who actually has plastics around us that we could go get?  A lot of people are taking their wastes to Georgia.  So, the expansion capabilities if we get this technology and decide it is feasible for us, we can actually expand into western North Carolina and get other people’s municipal solid waste to produce this and help the environment overall.”

He added, “From a money standpoint, we can charge them the same tipping fee that they’re potentially getting charged down there, but they’ll come here because it’s ten times closer.” 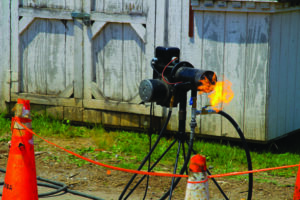 The second part of the grant is the two-week demonstration itself, and the third portion of the grant will allow for a prolonged demonstration and allow Cooper and staff to experiment with different feed stocks and municipal solid wastes.  “All the while, the gases being created are being sent to a testing lab which will tell the Tribe the quality of the natural gas…right now, we’re checking the measurable of the system to kind of give us an idea of how much we can produce, what the market is out there to see if we can potentially sell it to offset our own costs.”

Cooper said the reason for the two-week demonstration is easy.  “I wanted to bring it here for the Cherokee people to see.  I want them to come out here to kick the tires so to speak.  I didn’t want them to get the wrong impression that it was an incinerator.  I didn’t just want to submit a business plan.  I wanted people to feel it, touch it, smell it, see it.”