Toineeta wins Regionals, qualifies for State as the No. 1 Seed

CHERRYVILLE – Cherokee’s Anthony Toineeta (30-4) punched his ticket to the big show after finishing atop the podium in the 1A Western Regionals Wrestling Tournament on Saturday, Feb. 13 at Cherryville High School.  Toineeta defeated Rosman’s Tanner Whitman in the championship round to advance to the NCHSAA 1A State Championship Tournament in Greensboro this weekend as the number-one seed. 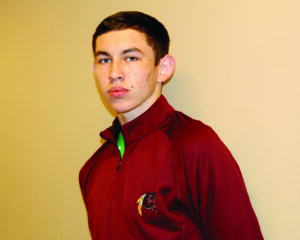 “Anthony did very well this weekend,” said Cherokee Wrestling Head Coach Tavi Rivera.  “He was focused and stuck to what we’ve been working on all year.  He definitely deserves to go to state and compete for a title.  We still have a few things to work on, but then again, you can never be too good.”

Toineeta needed less than a minute to pick up his first win in the opening round of the tournament as he pinned Starmount’s Vestal Dalton at the 38-second mark of the first period.  He continued his impressive performance by pinning East Surry’s Joseph Becker in the final second of the first round.  During the semi-final round, Toineeta held Avery’s Kyle Knight off the scoreboard in a 5-0 decision that went the distance.  Finally, he defeated Rosman’s Tanner Whitman (34-7) by a 5-3 decision to win first-place of the tournament.

Following is a round-up of Cherokee Wrestlers who competed at Saturday’s Regional meet:

The winners of the Regional meet in each weight class include: