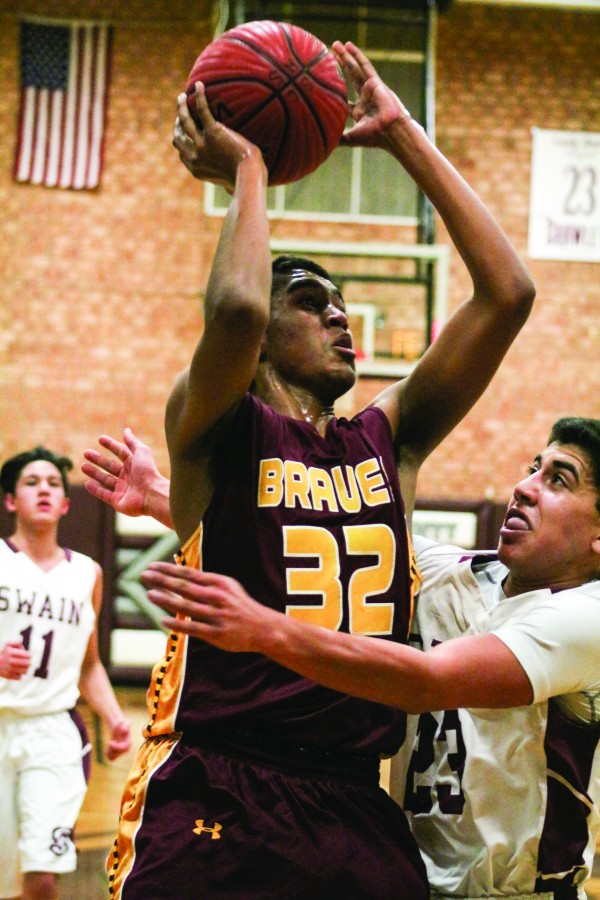 “I thought we played great,” said Willis Tullos, Braves head coach.  “We did a great job defensively, and we shot the ball extremely well.”

He was proud of his team’s accomplishment. “We won the Big Smoky Mountain Conference championship and are 11-1 in the conference, and that’s a great way to do it.  It was a great ballgame.” 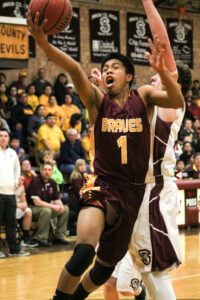 Jason McMillan (#1), Braves senior point guard, takes it to the hoop for two points in the first half of Thursday’s game. He led Cherokee with 23 points, 2 assists, 6 rebounds and 3 steals.

The first few minutes of this game were close with several lead changes.  Swain got on the board first and Teesateskie answered with a three-point shot at the 7:15 mark to put Cherokee ahead.  From that point, the teams traded baskets and the Braves led 10-8 at the 5:57 mark of the first.

For the next three minutes, Cherokee went on an 8-0 run to lead 18-8 with just less than three minutes left in the first period.  Swain tried to slow down the pace of the game, but Cherokee was able to outscore them 9-5 in the last two minutes to take a 27-13 lead into the second period.

The first two minutes of the second period were tight with Swain edging Cherokee 6-5 and the Braves led 32-17 at the 5:40 mark and 42-21 at the 3:22 mark.  Cherokee began to extend their lead, and Josiah Lossiah, freshman forward, hit a three-point shot from two steps inside the halfcourt line at the buzzer to give the Braves a 49-25 lead at halftime.

The third period was all Cherokee.  Their press shot down a lot of Swain’s offense, and the Braves outscored them 22-14 to take a 71-39 lead into the final period.

McMillan hit a three-point shot from the left side with 6:41 left in the ballgame to put Cherokee up by 41 (82-41) thereby invoking the NCHSAA mercy rule.  The Braves got a lot of play from their bench in the last period and went on to take the 30-point (88-58) win.

Swain was led by Evan Bradley with 19 points followed by Grant Shuler and Phinehas Little with 11 each.

To view or purchase photos from this game, visit: https://onefeather.smugmug.com/SPORTS/BASKETBALL/BRAVES-BASKETBALL-201516/At-Swain-February-12/