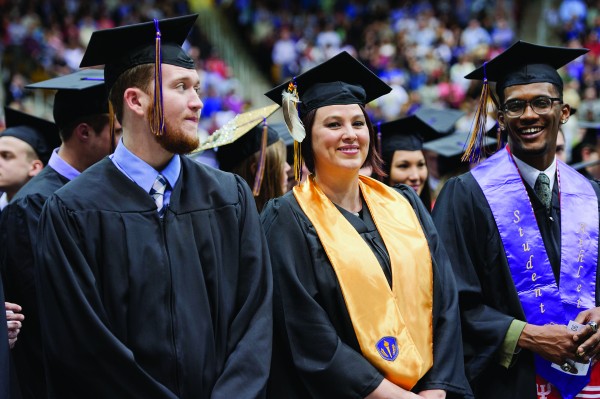 Sabrina Sue Arch (center), an EBCI tribal member, was among graduating students taking part in WCU’s fall commencement on Saturday, Dec. 12. She has been working toward her bachelor’s degree in entrepreneurship at the university. (WCU photos)

CULLOWHEE – Members of Western Carolina University’s fall graduating class who already have done what it takes to earn degrees have some advice for younger students who are still looking to begin their college careers.

“Try to balance having fun and school work, and make sure you do the work first,” said Leslie Barnes, who was minutes away from lining up with other graduating students to march into Ramsey Regional Activity Center for the start of WCU’s fall commencement on Saturday, Dec. 12.

“Time management will save you. It’s very important,” said Barnes, an undergraduate fine arts major from Clayton who plans on working for a while and then pursuing her master’s degree in fine arts.

Balancing school work and leisure time as critical to college success was a theme echoed by other graduating students, including Ryan Scarlett, an undergraduate anthropology major from Mebane. “You have to be able to delegate your time,” he said. “Nobody can tell you how much you need to study. You have to decide for yourself.”

Scarlett also recommends students pursue grants and scholarships as much as possible to help them deal with the financial requirements of college.

Family members and friends of the graduating students gathered at the Ramsey Center to help them celebrate their accomplishments. WCU’s fall class includes about 800 students who recently have been completing academic requirements to receive their degrees, and many of them took part in commencement. Another group of graduates who completed degree requirements during summer school and who already have been conferred degrees also joined in the ceremony. 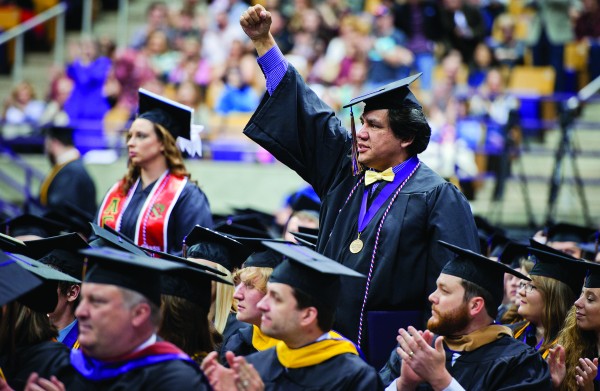 John David Arch Jr., an EBCI tribal member and Navy veteran, is shown standing as the commencement audience recognized graduating students who are active duty members of the military or veterans.

Commencement activities included an address by graduating student Julian Daron Jones, a Richmond, Va. native who was chosen to deliver the primary commencement speech through a selection process open to all members of the graduating class.

On campus, Jones is a member of the Honors College and serves on the student board of directors for that program for high-achieving students. A chancellor’s list student, he has been honored with the Lily Community Engagement Award for his community service work. With a major in business administration and law, and finance, Jones plan to pursue to master’s degree in business administration and hopes to eventually work in the area of public policy.

Those are the current details of his accomplishments at WCU, but in his speech, Jones told the graduating students and new WCU alumni that he barely graduated from high school and he dropped out of college twice before coming to WCU. At that time, “I could only envision what it would be like to one day hear my name called and walk across the stage to receive my bachelor’s degree,” he said. “It was so far-fetched that I could not quite wrap my brain around it. Today, I am overwhelmed with joy and passion and a desire to help the next generation of students succeed.”

Also during WCU’s commencement, recognition was given to all those wearing caps and gowns who are active duty members of the military, veterans, or members of the National Guard and Reserves. Those students were distinguished by red, white and blue honor cords.

WCU Chancellor David O. Belcher presided over commencement and delivered the charge to the fall semester degree candidates and summer graduates. In his charge, Belcher told the graduating students and new alumni that regardless of whether they have their futures mapped out, or they are uncertain what is coming next, they have the minds and skills to chart their own courses in life.

“As you look toward your future, I charge you to hold tight to your grounding at Western Carolina University and the values for which it stands, to remain firm in your commitment to excellence and high standards, and to continue learning, whether in formal settings or on your own,” Belcher said.

A complete list of WCU’s new graduates will be announced following the posting of grades from final examinations.