EDITORIAL: Things that go “bump” in the night 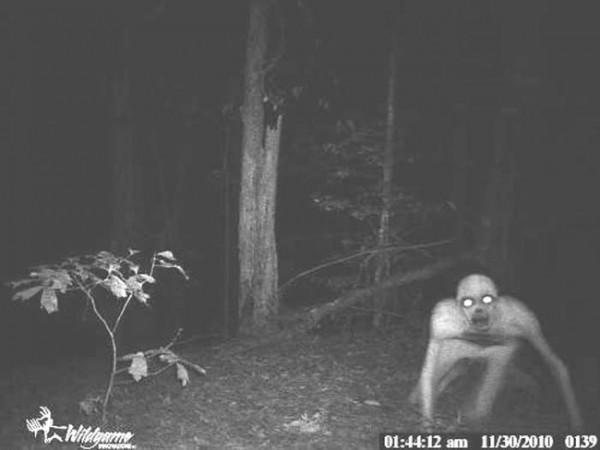 This image has been passed around social media for some time and attributed to many different occurrences. A local person gave it to the One Feather, stating that it was her understanding that it was taken on Mount Noble, possibly from a game camera. The origin and authenticity of the photo are unconfirmed.

For some, Halloween is a time of costumes, fun and candy. For some, it is a benchmark in the gardening season, an indicator that harvest time has arrived. For others, it brings up concerns of witchery and demonic celebrations. For a few, it is a reminder of strange and frightening happenings; a portion of life that cannot be explained with common sense and science.

I was discussing doing a story, with a friend from Big Cove, on the unexplainable happenings that incite fear and puzzlement here on the Boundary, stories usually revisited this time of year. Just mentioning the idea brought to her mind some frightening happenings in her life. She recounted a time when she and her brother travelled up to the Thomas Divide at night in 2000. They had heard stories of mysterious, luminous orbs that dance in the mountains. She said that if I wanted to see it firsthand to go up there and look around for myself (she didn’t volunteer to be my tour guide). On the occasion that she was there, orbs of light moved around and down the mountains, then started moving toward her and her brother. Frightened, they decided to leave, quickly. They drove down the road, the orbs pursued them!

In 2004, an acquaintance was out in the woods one day when he saw an animal, which he first thought was a bear, walking through the woods. He noticed something odd about the animal in that its hind legs were much longer than its front legs. As he tried to move closer to get a better look, the animal stood upright and ran into the woods, similar to a man.

In 2010, she was at home alone with her son. He was playing with a big box. She had gotten herself a cold drink in a large glass and placed it on the mantel above where she was sitting. She spoke loudly to her son to stop running around the house. Her son told her not to speak so loudly because she would wake his friend up. Since there was no one else in the house, she told him that it was her house and she would speak as loud as she wanted. The son again said not to speak so loudly or she would wake up her friend. As she spoke again to tell her son that she would speak as loud as she wished, the large glass on the mantel imploded like something grabbed it and crushed it in their hand.  When she asked her son to describe his “friend”, he said that she was a tall, heavy-set woman with long, straight black hair. The mother never saw this friend.  She apparently experienced its presence.

Another friend related to me that, during a visit to the Oconaluftee Indian Village in October 2012, he experienced an unusual incident. He was working at an event, speaking to another gentleman. He said that as he spoke, he saw a little girl by the man’s side. They talked for several minutes.

As they were about to say goodbye to each other, my friend asked the man who the little girl was that was standing beside him.

The man said, “What little girl?” As they both looked down beside him, the girl had vanished.

A night or two later, he was taking a tour of the old dormitories at the Village with a group of people. The tour guide led the group into one of the rooms to give a talk. My friend sat down beside an old man. He tried to carry on a conversation with him, but the man refused to speak. He just sat there, staring blankly. On the way out, my friend started speaking to another person in the group. When they got outside the dorm, he realized that the old man had not come out with them. He told the group that he couldn’t just leave the old man in there. So, he went back in to get him. There was no sign of the old man in the room. He, too, had vanished.

Cherokee storytellers have passed down many legends of strange occurrences. Few children are unfamiliar with the stories of Spearfinger and Uktena. We sometimes tend to dismiss these stories as fairy tales with no basis in reality. But, elements of those long ago stories show up in the recollections of modern family members. One person conveyed to me that her daughter is stalked by a tall, shadowy figure only visible to her. Sometimes it followers her throughout her house. Other times, in the dead of night, she will awake, feeling she is being watched. And, on some nights, she will wake up, unable to move, as if something is sitting on her chest.

You will notice that I have not given any names as I relate these stories to you. Many people believe that to speak of their strange experiences will “breathe life” back into them and cause more strange things to happen. So, I have left out the names to protect those who have shared their stories. Nearly every person I mentioned this story to, shared their own story or that of someone they know. So, know that when you hear those whispers in an empty room, the cries of infant in tunnel on the Parkway, or orbs of light chasing you down a lonely road at the Thomas Divide…you are not alone.