Following the inauguration of Principal Chief-elect Patrick Lambert on Monday, Oct. 5, Principal Chief Michell Hicks will move out of the EBCI Executive Office and into an office occupied by Lambert for more than 22 years.  The Tribal Gaming Commission announced on Friday, Sept. 11 that Chief Hicks has been hired as its new executive director, the position that Chief-elect Lambert retired from earlier this year. 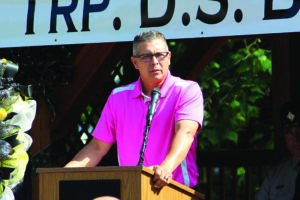 Principal Chief Michell Hicks, shown at an event this summer, has been hired as the new executive director of the Tribal Gaming Commission effective Oct. 6. (AMBLE SMOKER/One Feather)

In a statement released to the One Feather on Sept. 11, the Commission wrote, “Mr. Hick brings a wealth of directly-related experience to the position.  He will be an especially valuable addition to our organization during this period of growth and expansion in the gaming industry.  He plans to take a brief respite to perform previously planned travel before reporting for duty.”

Rose related that the selection committee was comprised of himself and Blankenship as Brown applied for the position of executive director.  “The executive search process began in February 2015,” said Rose.  “The TGC Commissioners, in an effort to achieve objectivity and avoid bias, hired an executive search firm (Valliant of Albuquerque, NM) to handle the search.”

The position was advertised in the Cherokee One Feather and at Harrah’s Cherokee Casino Resort.  “They received all replies, evaluated each applicant against the position description and qualification requirements, and they rejected those who did not qualify (incomplete applications, inadequate education, lack of experience),” Rose commented.  “They interviewed each of those who they felt were qualified.”

Rose related that by mid-July a total of nine candidates were selected to be qualified for the position and were ranked accordingly.  “The TGC Commissioners requested they provide the names of the top five applicants along with all of the criteria they used to rank the applicants,” Rose noted.  “This was the first point in the process that the Commissioners were made aware of the applicant’s names.”

After reviewing the criteria used to rank the candidates, Rose and Blankenship interviewed the top three candidates.  “The top-rated candidate was the first choice of the Commissioners,” said Rose.  “Compensation was discussed.  The Commissioners offered the maximum compensation allowed for the position.  Subsequently, the applicant formally withdrew from consideration because the compensation was inadequate to meet his requirements.”

Chief Hicks was the number-two ranked candidate and participated in two additional interviews.  According to Rose, an offer of employment was made and accepted by Chief Hicks.  “The offer was formalized in an employment agreement and was accepted by the applicant,” Rose said.  “His compensation package was substantially less than the maximum compensation allowed for the position.  The top dollar amount of salary for the executive director position, as established by independent consulting firms and approved by the Tribe, is $257,000.”