For the past 15 years, Camp Amigo, based in Florida, has been providing week-long camp experiences for children who are the victims of burns.  This year, the Camp decided to spend some time in the mountains and visited Cherokee on Thursday, June 25.

“I come up here a couple of times a year because I just love the mountains,” said Rusty Roberts, a Tallahassee, Fla. firefighter who runs the Camp.  “I wanted the kids to see something different and to get a different experience and what more to go with the culture of the area than this.” 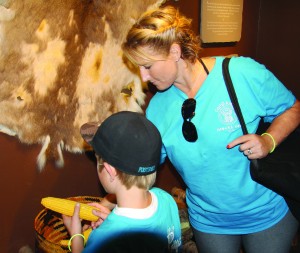 Roberts, who was named the 2014 Florida Professional Firefighter of the Year, said there were 39 children and 20 adult burn survivors along with about 50 others for a total of 110 people in the group.

Roberts said Camp Amigo is run by professional firefighters, nurses, burn unit workers, and burn survivors who volunteer their time for a week each summer.  This year’s Camp Amigo was held June 22-28 and was headquartered at the Nantahala Outdoor Center with daily excursions to various places in western North Carolina. 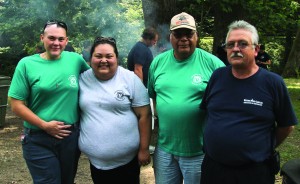 Curtis Arneach, Cherokee Fire Department Chief, said his department is glad to be of service to the CBCF and Camp Amigo.  “We try to help out any which way we can…many times, here at home, we’ll get out and take donations for clothes and other things if there’s been a burn out.  So, it’s just a good way for us to reach out to the community.”

Kitty Taylor, CBCF vice president, related that the group collects aluminum cans that they turn in for money which is donated to the Duke Burn Center and the Wake Forest Burn Center.  “We also help local victims.  Mainly, it goes to travel expenses to the burn centers.”

They have also been doing bucket drives for donations and have been able to help four area families in the two years the group has been in existence.

“Anyone is welcome to join,” Taylor said.  “We have their full support, but it’s not just for firefighters.”