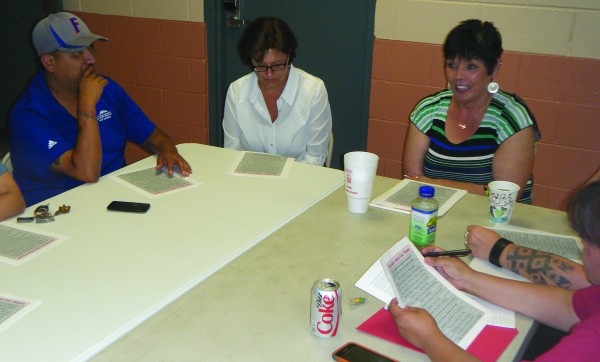 Chris Watty, Janet Owle, and Frieda Huskey, along with other members of the Fair Committee, review the theme submissions being considered for this year. (ROBERT JUMPER/One Feather)

By ROBERT JUMPER
ONE FEATHER EDITOR

The primary item on the agenda for the committee was the selection of the theme for this year’s Fair. During a publically advertised contest this spring, 19 entries were received from EBCI tribal members with their ideas for the theme. All 19 were reviewed by the committee. The theme has to be appropriate for the Cherokee Indian Fair marketing, fair parade floats, community and individual art and displays. Important to the committee is that the theme represent the culture and people. The committee voted to use the theme “Weaving Dreams and Traditions Into Our Future”.  The winning theme was submitted by Ernestine Lossiah, and she will receive $100 for her effort.

Huskey told the group that she and Mollie Grant, EBCI Pageant Committee, had discussed the Fair schedule for the junior pageants, and the plan is to have the pageants on the following days:  Tuesday at 7pm, Wednesday at 6pm and Thursday at 6pm.

The meeting concluded at 6:30 pm. The next scheduled meeting of the Fair Committee will be Monday, June 15 at 5:30 pm at the Exhibit Hall. Everyone is invited to attend and be a part of the planning process.