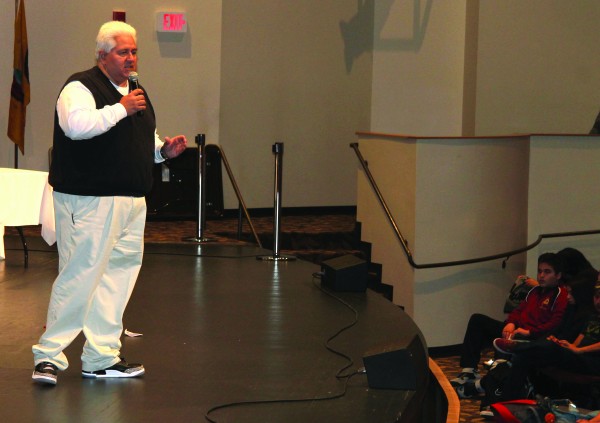 Shawn Crowe, emcee for Monday’s “No One Plans To Be An Addict” event at Cherokee Central Schools, talks to the students about the perils of drug and alcohol addiction. (SCOTT MCKIE B.P./One Feather photos)

“One is too many and 1,000 are never enough when you’re talking about drugs,” Shawn Crowe told a group of over 600 students during an assembly at the Chief Joyce Dugan Cultural Arts Center on the morning of Monday, March 23.  The event, called “No One Plans To Be An Addict”, was sponsored by the Cherokee Central Schools and the Cherokee Youth Council with the hope of having a frank and open discussion about the perils of addition.

Crowe, who now works in the IT department at Cherokee Central Schools and served as the emcee for Monday’s event, is 19 years sober.  He told the students of his bad experiences with drugs and alcohol – a time he called “the most shameful times of my life”.

“All you have to do is ask for help,” he told the students relating that total abstinence is the best policy.  “Stay away from it.  It will lead you on a path to destruction.”

Ryan Sampson, a 2004 graduate of Cherokee High School, has been sober since April 2011.  “I shouldn’t be here today.  It’s by God’s grace that I am here today,” he said telling of his pathway into addiction.

“It’s real.  It’ll eat on you.  I’ve got a lot of friends that aren’t here anymore.  You’ll never understand until it touches you.  This drugging thing is a real thing, and it’s hard to come off of.”

Sampson encouraged the students to stay in school, work hard and set goals, and avoid the perils of drugs and alcohol.  “Once you start on this road, it takes a long time to come back.” 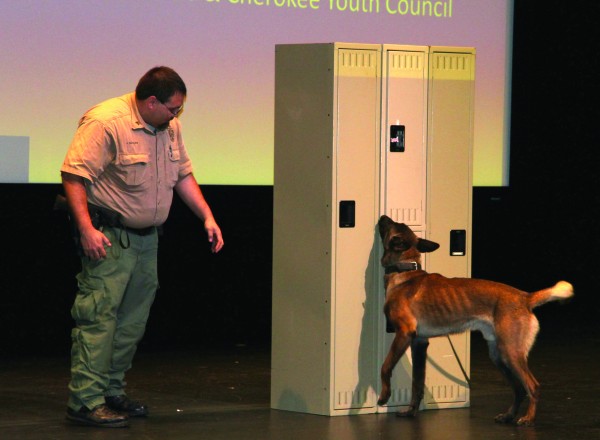 One 15-year-old student (name withheld due to age) spoke on her family’s struggles involving the addiction of her mother.  “It can be hard seeing someone you thought was invincible being taken down by something as small as a prescription pill.  Be smart and learn from other’s mistakes.  Break the cycle.”

The guest speaker for the event was motivational speaker Jessie Funk who spoke on empowerment of one’s self, finding your inner greatness, leadership and more.  She told the students to look within themselves to find their greatness to better avoid the temptations when offered drugs or alcohol.  “You want them to like you, but you have to fight for your greatness.”

She spoke of chasing ‘highs’ in life no matter if they are from drugs and alcohol or fame or something else.  “The high is never permanent…chasing a temporary high will never fill you up.”

Funk spoke honestly on her struggle with bulimia.  “For two years, that sucked the life out of me.  It was an addiction.”

She ended her talk by telling the students, “We are born with greatness in us.  Make a conscious choice to believe in your own greatness.  You have to decide that you have greatness in you.”

Cherokee Indian Police Dept. Sgt. John Taylor and his trusty partner, Ranger, gave a drug search demonstration during the assembly.  Also, drug surveys were given to the students as they entered the assembly.  The results of that survey will be published in a future article in the Cherokee One Feather.