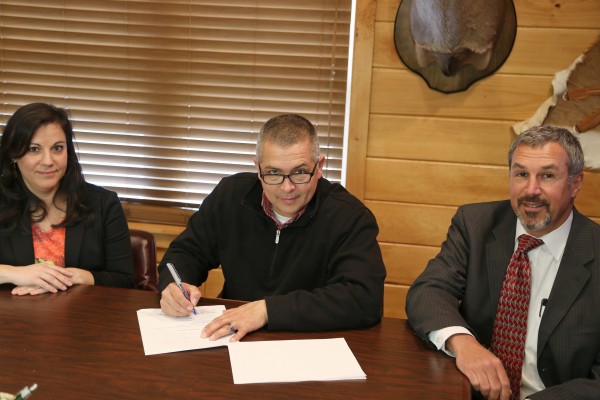 The Eastern Band of Cherokee Indian and the Federal Courts for the Western District of North Carolina have signed the first Memorandum of Understanding between an Indian Tribe and a Federal Court to allow Federal Central Violations Bureau (CVB) Court to be held in a Tribal Court facility.  This historic Memorandum of Understanding, signed by Chief District Court Judge Frank Whitney and Principal Chief Michell Hicks, authorizes CVB Court to begin on Thursday, April 2 at the EBCI Justice Center.

CVB Court is presided over by a Federal Magistrate Judge and resolves misdemeanor and petty offenses that occur on federal property, such as the Blue Ridge Parkway and the Great Smoky Mountains National Park.  These cases had been heard in Asheville since the closing of the Bryson City Federal Courthouse in October 2013.

“We are glad to share our new Justice Center with the Federal Courts because it makes it more convenient for people to handle their cases here”, says Cherokee Supreme Court Chief Justice Bill Boyum.

The Justice Center will host CVB Court on April 2, Aug. 6 and Dec. 3 with additional Courts to be added in 2016.  A 9am ceremony is scheduled to coincide with the initial court date of April 2.

Chief Justice Boyum added, “We recognize the need for it, and it is just good business for us to assist the federal courts because they work so closely with us, especially on our more serious criminal cases.”

The EBCI’s Justice Center, funded partially by Federal Recovery Act funds, opened in January.  The Cherokee Tribal Court and the Cherokee Indian Police Department are already fully operational in the building.  The jail portion of the facility is scheduled to open by the end of this month and is expected to house most, if not all, of the tribe’s prisoners.  The new jail will provide a large array of rehabilitative services, including drug treatment, mental health services and education opportunities for our inmates.

The EBCI Justice Center will also house a satellite office for the Federal Probation Department, which will make it easier for federal probationers on the Qualla Boundary.