Work on WCU mixed-use facility to begin this spring

Images (above and below) provide an early look at the possible building design for a new 120,000 square-foot structure featuring a mix of residential units and commercial and dining establishments scheduled to be built on the Western Carolina University beginning this spring. (Images provided by Hanbury Evans Wright Vlattas & Company)

CULLOWHEE – The next phase of a project on the Western Carolina University campus to build a new mixed-used facility on the site of a structure damaged by fire in November 2013 is expected to get underway this spring, university officials said.

The current timetable for the project, which will result in a 120,000-square-foot building featuring a mix of residential units and commercial and dining establishments on the ground floor with student residential spaces on the upper floors, calls for construction to begin in May. The facility is expected to include a total of about 380 student beds.

The Board of Trustees of the Endowment Fund of Western Carolina University, which owns the commercial strip along Centennial Drive in the center of campus where the blaze occurred, has selected Ambling University Development Group to develop the new mixed-use facility.

Fire broke out in the morning hours of Thursday, Nov. 21, 2013, severely damaging three restaurants on the ground floor of the two-story structure – a Subway sandwich shop, Rolling Stone Burrito, and Mad Batter Bakery and Cafe.  The second story of the building, which had contained apartments until several years ago, was unoccupied. The section of the building that houses Bob’s Mini Mart was not damaged, nor were other nearby commercial properties. No injuries were reported.

Notices have been sent to all current tenants of the remaining businesses in the commercial strip that existing leases will terminate March 1, said Mary Ann Lochner, general counsel for the university. “This will enable the Endowment Fund to turn the site over to the developer in order to have sufficient time for the site work that needs to be done, including asbestos abatement, as part of the demolition process,” Lochner said. “We expect construction to get underway in May, with the target for occupancy in August 2016.” 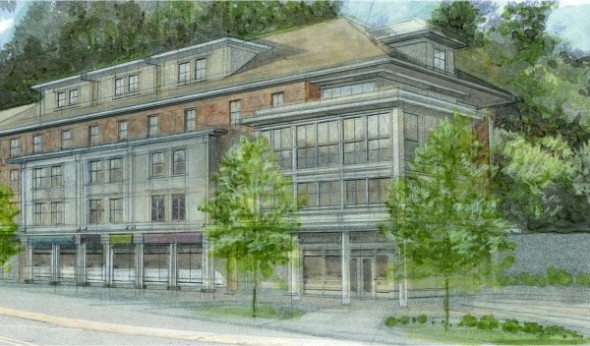 Owners of the affected businesses and other existing establishments along the commercial strip have the right of first refusal for commercial space in the new building, she said. “The current tenants are engaged in direction communication with the developer regarding potential leases in the new space,” she said.

The developer is conducting market research to determine what commercial interests would be successful in the new building, Lochner said.

Ambling University Development Group is completing final plans for the building and developing schematics for the project. The building is expected to be between three and four stories in height, with living space for 350 students on the upper floors. The residential space will provide suite-style, double-occupancy living arrangements, with a small number of single-occupancy loft-style rooms. In addition to a mix of retail and dining establishments, the ground floor is expected to include residential space for another 30 beds or so.

The building damaged by the fire was formerly the site of the Townhouse restaurant, a longtime campus landmark and popular gathering place for students, faculty and staff from the late 1940s to the mid-1980s.

The Board of Trustees of the Endowment Fund decided in February 2014 against replacing or repairing the structure after reviewing cost estimates, tax assessments and anticipated insurance settlement proceeds, choosing instead to proceed with demolition of the property followed by private development of a new mixed-use facility on the site.

The board weighed factors such as the historic significance of the property to the campus community, the contributions to WCU culture made by private businesses operating in the center of campus, and ongoing support by members of the campus community for owners and employees of the affected businesses.

An independent architectural and engineering firm estimated the cost to replace or repair the damaged building, including additional expenses associated with bringing a structure originally built in the 1940s up to current building codes, would be more than $1.5 million. According to Jackson County records, the tax value of the structure is assessed at $254,430.