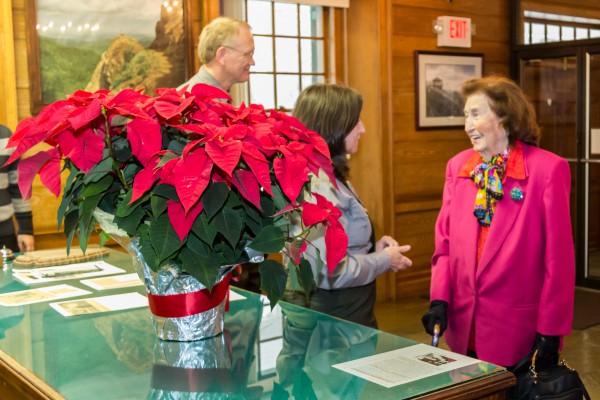 Each December, Mrs. Wanneta Johnson (right) selects the biggest, finest poinsettia she can find in Johnson City, Tenn. and delivers it to park headquarters and thanks everyone she meets for helping to rescue her son in 1974. (NPS photo)

Forty years ago, on Dec. 3, 1974, park rangers from Great Smoky Mountains National Park rescued 15-year old Eric Johnson and a companion who had been trapped deep in the park’s backcountry by a chest-deep snow storm.  On Wednesday, Dec. 3, 2014, Eric’s mother traveled from Johnson City, Tenn. to park headquarters in Gatlinburg, Tenn. to thank the park rangers for saving her son’s life – a trip she has made every Dec. 3 for the past forty years.

Each December, Mrs. Wanneta Johnson selects the biggest, finest poinsettia she can find in Johnson City and delivers it to park headquarters and thanks everyone she meets. This year, Eric joined his mother as she met with Acting Superintendent Clayton Jordan and several members of the park staff including current members of the park’s search and rescue team, none of whom were working at the Smokies in 1974. Over the past four decades, hundreds of park rangers have come and gone, but Mrs. Johnson treats each one as if he or she had a hand in saving Eric’s life.

When asked why Mrs. Johnson comes back to the park every year, she responded, “How could I not!”

In 1974, several rangers attempted to search for the boys on foot and by ATV, but made little progress because of conditions.  They were finally able to locate the boys at Tricorner Knob Shelter from a helicopter.

Once the boys were found, a larger U.S. Army helicopter was brought in to hoist the boys out of the backcountry.  Eric Johnson and his friend, Randy Laws, had been held up at the backcountry shelter for three days without adequate food, water or equipment.   Both young men suffered from dehydration and exposure and Eric had some frostbite, but otherwise they were in good condition.

Acting Superintendent Clayton Jordan, the seventh superintendent to accept Mrs. Johnson’s gift said, “It is humbling for us on the park staff to be honored every year by Mrs. Johnson’s visit back to the Smokies.  Her recognition means a great deal to our rangers who are sometimes tasked with going out in rough weather to come to the aid of visitors like Eric and his family.”