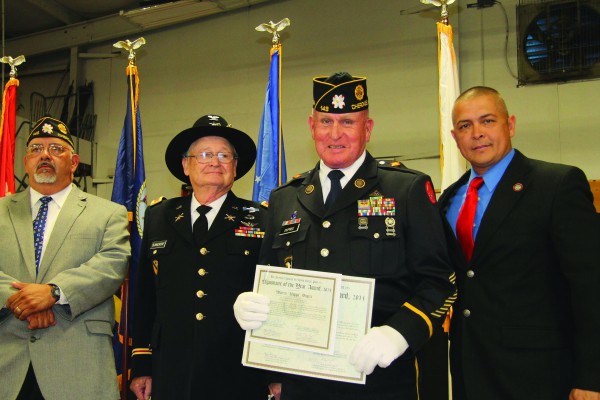 Veterans of all branches of the armed forces were honored during a ceremony in Cherokee held on the eleventh hour of the eleventh day of the eleventh month.  The Steve Youngdeer American Legion Post 143 hosted the event at the Cherokee Indian Fairgrounds on Tuesday, Nov. 11.

“Veterans have served their country many times with great sacrifice,” said Lew Harding, Post 143 Commander.  “They fought with their minds and their hearts as well as with their bodies.  Our veterans recognize that service to our country does not stop when we come off of active duty, but continues when we come home to our communities to serve and lift up our country and to lift up each other.”

Commander Harding went on to say, “It is true that many of our brothers and sisters did not return.  It is a feeling of peace and also profound gratitude that we offer them our appreciation for a job  so lovely done and the ultimate sacrifice paid by those brothers and sisters.”

Post 143 gave out several awards during the event including the Legionnaire of the Year Award which went to Warren “Hoppy” Dupree, U.S. Army retired, who serves as the Post’s service officer.  Of Dupree, Commander Harding said, “I have never seen or been blessed to experience the enthusiasm, initiative and leadership that brother Hoppy has brought to us.”

The Certificate presented to Dupree read in part, “…for your willingness to go above and beyond the requirements of your job and raise the standards of other veteran’s service organizations and for your forward-looking, no-nonsense example of leadership, we thank you.”

“I’m thankful for all of our veterans,” said Principal Chief Michell Hicks.  “Being in the service is a true commitment, and it requires bravery, courage, and such a commitment from the family that we just don’t appreciate that enough, and I just want to personally thank everyone for serving and giving us the freedom that we have here today.” 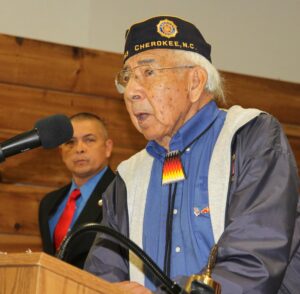 “I am beyond honored to be with you today,” said Wilnoty.  “Today is in honor of you all for going above and beyond in being a member of this Tribe and of this great nation and for all of your sacrifices, hard work and dedication that you gave and continue to give.”

A special wreath laying ceremony was held with the wreath being placed by Col. Blankenship, Maj. William Underwood and Sgt. Clifford Long.  Maj. Underwood then read the list of EBCI tribal members killed in action in WWI, WWII, Korea and Vietnam while Sgt. First Class Alva Brown rang a bell in their honor and memory.

The Post 143 color guard posted the colors at the beginning of the event.  The invocation was given by Rep. Shell, a Cherokee prayer was offered by EBCI Beloved Man and U.S. Navy veteran Jerry Wolfe, and the benediction was given by Maj. Underwood.  Musical presentations were given by Yona Wade who sang “God Bless America” and Legionnaire Phyllis Shell who sang “It’s An Honor to Serve.”

To view and purchase photos from this event, visit http://onefeather.smugmug.com/2014-Community-and-News-Events/Veterans-Day-Ceremony-11-11-14/i-x8D5Vqx