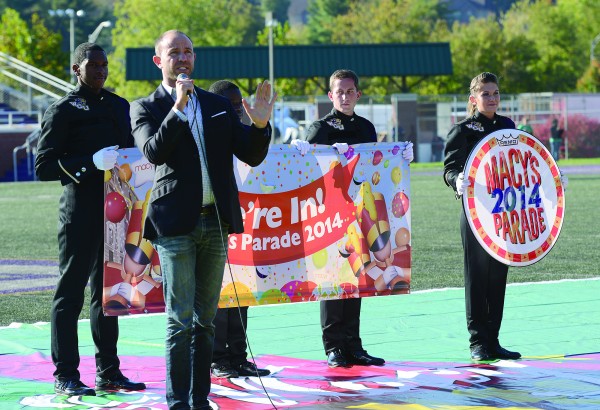 Wesley Whatley, creative director for Macy’s Thanksgiving Day Parade, announces to members of the Western Carolina University Marching Band that they will be leading the annual holiday event through the streets of New York City. (Photo by Starfire Photo)

CULLOWHEE – When the 505 members of the Western Carolina University Pride of the Mountains Marching Band pound the pavement of New York City for the Macy’s Thanksgiving Day Parade, they won’t be just taking part in the beloved holiday tradition. They will be the very first parade participants to hit the streets that morning.

That’s because the WCU unit has been selected as the lead band for the parade by organizers of the event, to be held Thursday, Nov. 27.

Wesley Whatley, creative director of the Macy’s Thanksgiving Day Parade, broke the news to members of the Pride of the Mountains during a recent band tournament held on campus.

“We are so excited that the Pride of the Mountains Marching Band has been chosen to lead the parade through the streets of New York City,” said David Starnes, WCU director of athletic bands. “What this means is that we will be leading the parade from Central Park West along the parade route.” 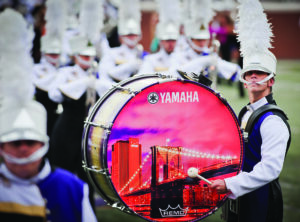 The drumheads of the Pride of the Mountains Marching Band are adorned with an image of the New York skyline. (Photo by Ashley T. Evans/WCU)

The parade will be broadcast live by NBC beginning at 9 a.m. Thanksgiving Day. The television broadcast includes other acts that perform for the cameras as the parade moves through the city to the stage area at 34th Street, Starnes said. “We will be the first parade participant to be seen on TV,” he said.

During its time in front of the cameras – and an international TV audience – the band will perform “I’ve Seen the Lights Go out on Broadway” by Billy Joel. During the parade, the band will perform other selections from its 2014 halftime production, “Street Beatz,” a musical travelogue of “The Big Apple.”

The Pride of the Mountains is one of only 10 marching bands selected from across the nation to perform in the 2014 Macy’s parade. The invitation to perform at the event, which came in a surprise on-campus announcement by parade officials in April 2013, is the latest in a long line of accolades bestowed upon the WCU marching band.

The Pride of the Mountains was recipient of the 2009 Sudler Trophy, awarded by the John Phillip Sousa Foundation and considered the nation’s highest and most-coveted award for college and university marching bands.

The band followed that up with an invitation to march in the 2011 Tournament of Roses Parade in Pasadena, California, where it won “favorite band” in a poll conducted by KTLA-TV, earning 40 percent of all votes cast in the poll and more than any of the parade’s other musical groups.