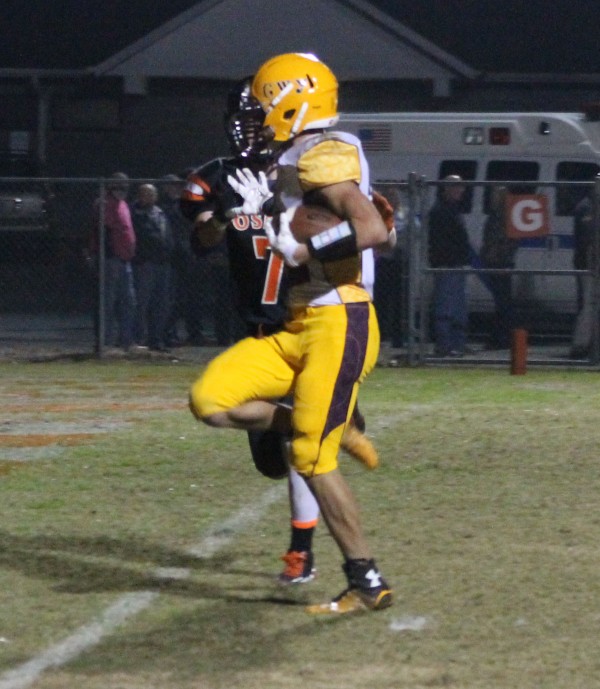 After catching a pass from Brandon Buchanan, Dustin Johnson (#22), Braves wide receiver, runs by Rosman’s Gage Orr (#7) for a score in the third quarter. Johnson caught 9 passes for 188 yards and 2TDs on the night. (SCOTT MCKIE B.P./One Feather photos)

ROSMAN – Dustin Johnson, Braves wide receiver, had a massive game at Rosman on Friday, Oct. 24 as he caught 9 passes for 188 yards and 2 TDs.  Cherokee (3-6) scored 22 third quarter points but came up a little short as they lost to the Tigers 46-22.

In the Braves big third quarter, they gained 157 yards including 140 in the air.

Cherokee’s defense was led by Kennan Panther, the second leading tackler in the state, with 23 tackles.  He was followed by Logan Teesateskie with 21 and Tye Mintz, fresh off the JV squad, with 15.  Three Braves recovered fumbles in the game including Jaron Bradley, Steven Swayney and Channing Lossiah.

Cherokee got the ball first and turned it over on downs after six plays.  Rosman took over on their own 43-yard line.  Two plays later, Tanner Green ran 54 yards for the first score of the game.  The point-after kick was no good and Rosman led 6-0 with 9:45 left in the first quarter.

Four plays into their next drive, the Braves fumbled which was recovered by Rosman at their own 45-yard line.  The Tigers would get into the end zone six plays later as Josh Rice scored on a 27-yard run.  Rice also ran for the two-point conversion to make it 14-0 at the 6:02 mark in the first. 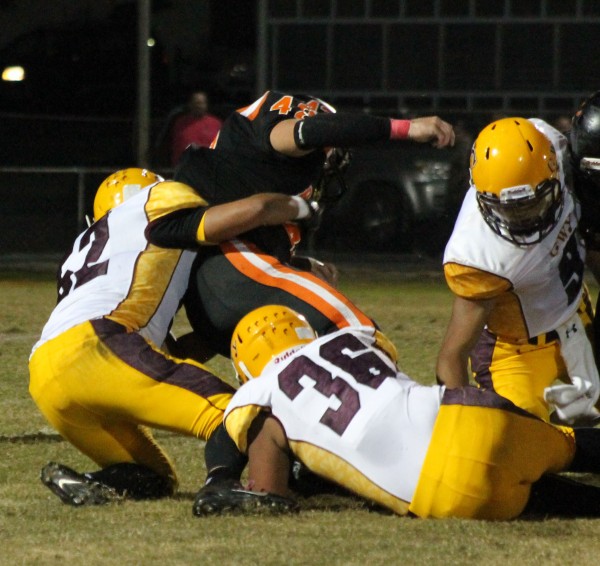 Logan Teesateskie (#52) and Kennan Panther (#36) combine to tackle Rosman’s Tanner Green (#42). Panther led the Braves with 23 tackles and Teesateskie had 21.

Cherokee had to punt on their next possession, but Rosman fumbled the punt reception which was recovered by Lossiah at the Rosman 39-yard line.  The Braves drove down to the Rosman 11-yard line, but were unable to punch it in and turned the ball over on downs.

Cherokee’s defense held strong though and held the Tigers to a three-and-out.  But, Rosman got the ball back three plays later with an interception.

Rosman started at their own 11-yard line and got four first downs driving to the Cherokee 35-yard line when they fumbled the ball which was recovered by Bradley.

The Braves couldn’t move the ball though and had to punt on the ensuing possession.  Rosman then took over at the Cherokee 41-yard line.  Ten plays later, Rice punched it in from two yards out for a touchdown.  Green ran for the two-point conversion and Rosman led 22-0 with 19 seconds left before halftime.

Cherokee came out of the locker room pumped up and caused a fumble on the opening kickoff of the second half.  The ball was recovered by Swayney at the Rosman 18-yard line.  On second down, Buchanan found Johnson down the left sideline for an 18-yard touchdown pass.  Buchanan connected with Panther for the two-point conversion pass to make it 22-8 just 40 seconds into the third quarter.

Rosman answered quickly though as they had a 4-play, 61-yard drive that culminated in a 41-yard touchdown run by Green.  The two-point try failed and Rosman led 28-8 with 8:53 left in the quarter.

The Braves came back with a 4-play scoring drive of their own as they started on their own 37-yard line and ended with a 31-yard touchdown pass from Buchanan to Johnson.  The two-point conversion failed and the score was 28-14 with 7:18 left in the third.

The Tigers scored again 22 seconds later as Green ran 44 yards for a score.  The two-point conversion failed and Rosman led 34-14.

Cherokee had a three-and-out and punted on their next possession and the Tigers started at their own 40-yard line.  They put together a 4-play drive that ended with a 43-yard touchdown run by Gage Orr.  The two-point failed again and the score was 40-14 with 4:10 left in the busy quarter.

The Braves answered back a little more than a minute later.  They started the drive on their own 44-yard line, and Johnson ran under a Buchanan bomb for a 55-yard gain on second down.  Two plays later, Buchanan finished it off by running it into the end zone from 4 yards out.  Buchanan passed to Jason McMillan for the two-point conversion and Cherokee cut into the lead at 40-22 at the 3:03 mark in the third.

Green added another Rosman score on a 9-yard run in the fourth quarter.  The two-point try failed and Rosman took the win at 46-22.

Cherokee hosts Andrews (1-8) in a key Smoky Mountain Conference matchup on Friday, Oct. 31 at 7:30pm at Ray Kinsland Stadium.  It will be Seniors Night for Cherokee with senior players in all fall sports being honored.

To view and purchase photos from this event, visit http://onefeather.smugmug.com/SPORTS/FOOTBALL/FOOTBALL-2014-Cherokee-Rosman/

(Note: CHS statisticians reviewed the game after reporting the initial stats and reported that Johnson actually had 9 catches for 188yds.  Those numbers have been updated in this article.)